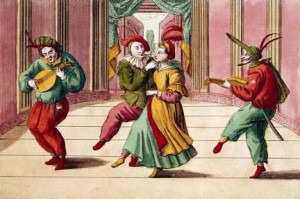 Madrigals in elevated style formed the basis of various musical entertainments during the late Italian Renaissance. Before the advent of opera, composers habitually turned to the dramatic madrigal in an effort to create new musico-dramatic forms. Among the most popular forms was the madrigal comedy, an unstaged but dramatic collection of madrigals. Sung consecutively, these madrigal comedies told a coherent story involving such subjects as love, jealousy, and beauty. Frequently classified as precursors of opera, Orazio Vecchi (1550-1605) more properly defined the madrigal comedy as “theatre for the ear,” as there is no clear correspondence between voices and characters. Instead, the voices are used as means to describe, or more frequently, caricature various figures.

One of the founding creators of the madrigal comedy was Adriano Banchieri (1568-1634). His book of five-part madrigals published under the delicious title Il Zabaione Musicale—in reference to a delectable Italian dessert—was issued in 1604. Ironically juxtaposing serious characters with the masked characters of the Commedia dell’Arte, this “theatre for the ear” follows a long line of Italian literary and musical traditions. Banchieri opted for a country setting—more precisely described as a pleasant meadow—and this pastoral background includes nymphs, shepherds and mythological figures that introduce themselves to the audience immediately in the opening “Già che ridotti siamo.”

For Alessandro Stradella (1639-1682), who composed both sacred and secular chamber works, music and the arts were a clear imitation of life. The composer was involved in a number of amorous intrigues and matchmaking enterprises, and following a scandal involving a Genoese noblewoman, was stabbed to death by hired assassins. Stradella’s romantic fascination engendered a rather turbulent life, but it was also mirrored in a number of stage works. Composed for the Roman Carnival season of 1665, Accademia d’Amore (Academy of Love) was commissioned by Princess Marina Mancini Colonna. Various allegorical figures engage in learned discussions on the sweet subject of love. Dividing the orchestra into concerto grosso and concertino, skillfully alternating recitatives and arias and interspersing a number of dramatic madrigals, Stradella accomplishes a remarkable synthesis of the musical and theatrical conventions of his time.

Where there is love, jealously cannot be far behind! Building on the influence of madrigal comedies, and particularly Alessandro Stradella’s refinements, George Frideric Handel (1685-1759) musically encoded the topic of jealously in his opera Orlando. The hero—originally sung by the great alto castrato Senesino—falls desperately in love with the pagan princess Angelica, who regrettably, is in love with another man. Driven to madness, Orlando is set on murdering the princess and her lover at the end of Act II. It takes the intervention of the magician Zoroastro, who swoops in on his flying chariot and takes the jealous hero away, to avert a catastrophe. Musically, Handel moves away from the formal conventions associated with opera seria and adopts a flexible approach to musical form. Inventively blending arioso and aria passages, scholars have described Orlando as “the musically richest of all Handel operas.” The highly influential epic poem Orlando Furioso by Ludovico Ariosto, and particularly the tearful agony of jealousy, also inspired musical settings by Giaches de Wert (1535-1596) and Antonio Vivaldi (1678-1741). Yet, in the end, the glorious virtues and the power of love triumph in Vivaldi’s pasticcio La virtù trionfante dell’amore (The Triumphant Virtue of Love), composed for the Roman Carnival season of 1724.