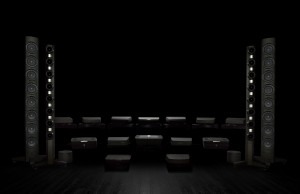 We sat quietly in a dark room, silent except for the slight hum from the air-conditioners.

“Let’s listen,” we were instructed.

Moments later, the first note of a glockenspiel sounded out, delicate and bright at first, before the marimbas joined in with a rendition of Bizet’s Carmen, fast and furious. Soon, my ears were bombarded left and right with drums, idiophones and chimes. With my eyes closed, I could almost see the musicians on stage, playing energetically and in sync, but when the last notes stopped ringing and the lights turned on, I was left staring at a massive dark grey and black hi-fi system. Tiny blue and yellow control lights blinked cheekily back at me.

David Cheung, creator of the hi-fi system, named Veritas Vos, turned to us and said, “Classical music is usually very demanding, and you go from really small signals to really large signals in a split second. But here, you can hear the wide sound stage, very deep. Normally you don’t hear so much depth, and [there is] not as much contrast.”

A self-prescribed audiophile, David was not a professional sound engineer, but began tinkering with his own hi-fi system five years ago, developing sound components to combat sound distortion he found in his speakers. He invited several of his audiophile and musician friends over to listen to the modified system and they were left impressed.

“My friends were completely bowled over by the much improved sound and some suggested that I should commercialize the technology,” he said.
Acting on their encouragement, David took his original ideas and insights to the next level and turned a mere tinkering exercise into a full-scale project that is now Veritas Vos.

Veritas Vos is taken from the Latin phrase veritas vos liberati, which means the truth will set you free. Today, the system is a masterpiece of 10 cabinets crafted from aircraft grade aluminum billet, three power amplifiers, and four skinny columns of woofers and tweeters, all designed to minimize spurious vibrations and maximize electromagnetic shielding. At my perplexed face, David went on to explain that all the technology and innovation involved aimed to do one thing: to produce sound as true to the music recording as possible.

“That’s why the music is more musical, more organic,” he said. “The sound that comes out of the machine is unforced. I have never heard anything like it outside of this room.”

If your aim is to play what is embedded in the recording as it is, would playing a bad recording in essence, make it sound extra bad? I asked.

Yes, but we were able to actually make them sound even better, said David with a knowing smile. He took out a recording by Elissa Lee Koljonen, and said that when his friends first told him to listen to the recording, he didn’t understand what was so special about it.

“The tone itself isn’t good enough, the phrasing is too mechanical,” he said.

As her rendition of Carl Eng’s Seashell started, David said, “Listen to this and tell me you don’t feel touched. I was touched.”

Rather than enhancing signals from the recordings, David aims to alienate the music from external distortions.

“Most hi-fi manufacturers would taste the food and put in seasoning to spice it up,” said David as he came up with a simple cooking analogy. “We figured out ways of letting the original flavors shine.”

“The only problem now is that people need time to adapt to [Veritas Vos],” added David with a laugh. Friends who were musicians and singers have commented that the instruments sound so real, and so near, that it became almost a surreal experience.

“It has all the elements of real music, but in a more condensed form. A soprano friend of mine said it was like the sound she would hear when she was singing,” he said.

David remains humble to the fact that Veritas Vos is still a work-in-progress, even as it continues to surpass higher-end products in the market in terms of quality and price.

At HK$ 12 million, he claims that his system beats competitors in every single performance criterion, including sonic texture, tonal colors, transparency, and depth of the soundstage, instrumental proportions and positioning.

“Most important of all, Veritas Vos is way ahead in terms of musicality and conjuring the sense of being there,” he was confident to tell me. “There are more expensive speakers out there that can’t do half of what our system does.”

I went back to David’s studio for a second interview a week later. We have done more tweaking to the system, he told me. The last few days, David and his designers had been working to refine the bass, continuing to minimize effects of sonic boom that was still present for experienced ears.

He put on one of Oscar Peterson Trio’s classic pieces, You Look Good To Me; the double bass plucked away at ease, unforced, with a sense of solidity as though Ray Brown was alive again and standing just to my right.

There was only the sound of music, not the system.

We finished with the last recording of Vladimir Horowitz’s rendition of Rachmaninoff’s Piano Concerto No 3 in d minor, when he was 75 years old.

Horowitz’s performance might be, as some say, awash with wrong notes and inconsistency, but the truth is, he is still one of the greatest Rachmaninoff interpreters of all time, and this was the last time he was recorded playing Rachmaninoff No. 3. Sitting in the dark with Veritas Vos, you’re taken back to New York, to front row seats at Avery Fisher Hall in 1978, in the presence of the great Horowitz.

“We try to preserve the integrity of the music,” said David as the recording came to an end and I find myself blinking back at the blue and yellow control lights.

“We are here to recreate some of the most magical moments in history.”