Guest Posts
In Touch with pianist Ernest So, the musical aesthete
by Cathy Hung March 31st, 2011 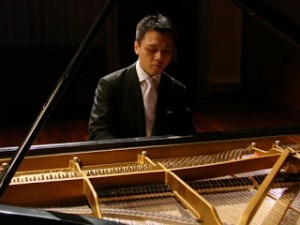 Having his first debut released at the age of eight, pianist Ernest So has been very determined on his path since young. “I grew up in a family where music was the only entertainment. I must have watched more videos of Karajan conducting Berlin Philharmonic or Horowitz, Weissenberg, Pollini than movies of Tom & Jerry when I was little.” Although his parents were not professional musicians, there had always been music running on and on at home. This single-tracked mind has enabled him to naturally follow his calling- to become an ambassador of music. He perceives the world as comprising of infinite knowledge of humanity in which each of us is its ambassador. “Each one of us is a medium to pass on something which has been passed onto us. To be that medium, you have to be a creative person. Because, creativity is the only access to whatever is out there.”


Receiving his secondary and tertiary education in the States, the pianist deciphers the divergence between western and eastern culture. “In Chinese culture, people often emphasize the establishment of identity than building a relationship with your profession. You must focus on technique first before developing musicality. I’d be worried if my music didn’t come across even though I hit all the right notes!” Attempting to shift the distorted value by encouraging more music appreciation, Ernest founded The Music Salon- a concept originated from the 19th century’s salon music which enables audience to enjoy a private concert experience. Besides, he also founded PerformNow, an assembly of young artists performing lesser-known repertoires, in view of the commercialized music scene. “I think history is somewhat biased too. It seems only commercially-successful composers are praised!” When concert halls feature Chopin’s works, PerformNow brings you more alternatives such as Mompou, Lili Boulanger or Bortkiewicz- one of his favourite composers.

Away from the spotlight, Ernest spends his time on piano restoring- a tedious and meticulous job that requires extra attention to fine details. It all started a few years ago when he met a sales representative from Yamaha Corporation. The two built their friendship on their passion and knowledge of the instrument. “Through him I realized that the manufacturing process is never about just manufacturing. In fact, there are certain octaves which can never be duplicated to another piano!” Now the team is one of the best Yamaha piano restorers in Asia.

Ernest is particularly attracted by beauty in matters. From arts to attire, he is tireless in seeking aesthetic perfection. “I don’t shop. My suits are all tailor-made with special attention to details and finishing. I believe only that can give you elegance.” The pianist draws his fashion inspiration from old Hollywood movies, from stars such as Sean Connery, Cary Grant or Clark Gable. The essence of elegance and gracefulness, now lost in modernity, has prompted the pianist to treasure past aesthetic even more dearly. Perhaps his obsession to sartorial art can be regarded as the greatest aesthetic temptation ever to entice him from music.

Beyond his sensitiveness to fine details, Ernest also has a big heart. Well aware of the poverty of the millions in rural provinces of Mainland China, he extends his care and love by joining a local charity that builds schools in villages. “Now I want to get more involved in society. Turning 30 is a point in life when you start to understand human suffering.” He believes that in a world of civilization, ensuring children’s education opportunity is more important than enabling international trade for the sake of coherence in society.

Talking with Ernest makes you feel how the pianist embraces the vastness of music with his humble heart and open mind. “I’m still learning and discovering unknown composers everyday and I realize the more you know, the more you don’t know.” Perhaps it is his genuine character that makes his music exclusively earnest.

Ernest So – Saperton (Gershwin): Bess, You is My Woman Now

Ernest So – Rachmaninoff: Wild Do Not Grieve