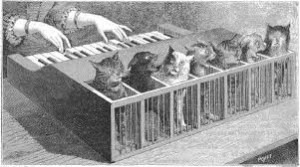 Man’s creativity comes to the fore in music: new sounds, new rhythms, new combinations. But, are there times when imagination can outstrip reality? We’ve found a couple of impossible instruments that seem to meet that criterion.

The cat piano or cat organ was designed, but we hope, never built. Anyone who’s had a cat will tell you of the impossibility of this: a cat? Awake? Sitting up in a box? Never! This was discussed in an earlier Interlude article.

The idea of this was taken up in a very elegant video, narrated by the musician Nick Cave.

Some instruments are so impossible, they exist only as animations. The “Resonant Chamber” combines a lute, several kinds of guitar, a boat lute, and other string instruments that very difficult to identify – all played pizzicato.

This same group, animusic, also came up with “Pipe Dream” – balls spit out of pipes to strike strings, drums, cymbals, and other instruments in perfect rhythm to create music.

The tech company Intel actually created this in reality, but it took 7 computers and needs a bit more help on the music side of things! It’s too bad that the sound of the air guns launching the balls overwhelmed the rest of the sound. It was also funny to hear the duration of music described solely by the number of notes…

The impossible can happen – or perhaps it’s better that some of these instruments exist solely as thought problems. Here kitty, kitty, kitty…