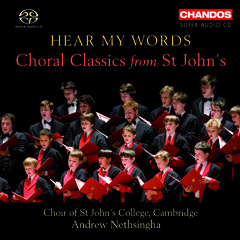 One of the finest collegiate choirs in the world perform a series of choral classics dated from early sixteenth century to 2007.

O taste and see was first performed on 2 June 1953 in Westminster Abbey at the Coronation of Queen Elizabeth II, the text, which is taken from Psalm 34, was sung while the newly crowned monarch received communion.