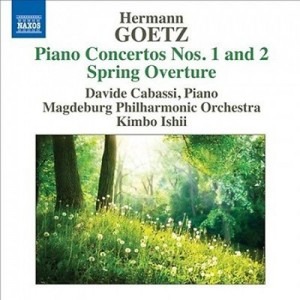 Hermann Goetz’s lifespan was no longer than Mozart’s, and though much admired by contemporaries, as a tragic genius his music became almost forgotten, and the domain of but a few connoisseurs such as Gustav Mahler. Goetz’s style remained closer to Schumann and Mendelssohn, preferring lyricism and clarity to the more radical approaches of Liszt and Wagner. The virtuoso First Piano Concerto was a student work, its lovely central adagio sharing a use of colourful wind parts with the freshly optimistic Second Piano Concerto composed six years later.