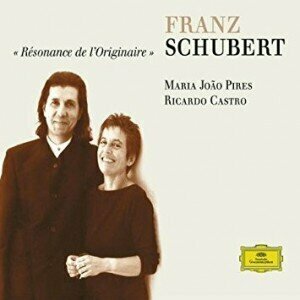 I was given this album by a friend for my 40th birthday in autumn 2006. I thought turning 40 would be easy: I told myself it was “just a number” and that it had no real significance, that it was just another day in my life. In fact, my birthday coincided with a difficult period in my adult life, when I realised, with a shock, that the boundaries of one’s emotional life are not completely impermeable, and that being married does not make one immune to another person’s attention and admiration.

During the year of my birthday, I started playing the piano seriously again after an absence of nearly 20 years (in the preceding years I was busy getting married, setting up home, working in publishing and antiquarian bookselling, having a child, and I lost interest in the thing about which I cared very passionately when I was at school).
Some of the first pieces I returned to were Schubert’s D899 Impromptus and the Moments Musicaux, pieces I had always liked, and attempted and played rather badly as a precocious teenager (my mother bought me the Edition Peters score after hearing Alfred Brendel play them). Returning to the piano after such a long time away was very hard, yet it was gratifying to find pieces that had been carefully learnt in my teens had not been entirely forgotten and were still “in the fingers” (as a professional pianist colleague of mine said once “the body does not forget that easily” – and it’s true). At that time, I didn’t even have a piano: I was playing, and teaching, on a digital piano, which did the job, but had none of the subtlety nor refinement of an acoustic piano.

At the time of my birthday, I was doing a lot of reading about Schubert’s Impromptus, pretending this was “research” for my (still unpublished!) novel. The D899 Impromptus have a special significance for the hero of my book – a young concert pianist poised on the cusp of a brilliant career until the First World War cruelly intervenes – and each one connects him to particular people or events in his life. It is significant that in his first concert after the war is over he plays the Impromptus as a way of reaffirming these connections and celebrating life and love.

Of course, in reality these late piano pieces of Schubert, together with the D935 Impromptus and the final three sonatas, are the works of a man at the end of his short life, yet Schubert was less than 10 years older than the hero of my novel when he wrote these wonderful works. These pieces, composed during a remarkable outpouring of late masterpieces, display many emotions, from anger and defiance (the D958 Sonata in C minor) to resignation and valediction (the last Sonata in B-flat, D960). The Impromptus are in many ways miniature versions of these big works: full of variety, containing a broad sweep of emotions from the chillingly bare G which opens the first of the D899 set to serenity of the third in G-flat and the final, life-affirming cadence in A-flat major of the fourth Impromptu.

Fantasie in F minor, D940
The Fantasie in F minor, D940, which opens «Résonance de l’Originaire», was composed in 1828, the last year of Schubert’s life, and is written for four hands (two pianists at one piano). It has a four-part structure, not unlike a sonata, but the “movements” run into one another with stylistic bridges between each. Schubert had already explored the Fantasy form in his Wanderer Fantasie D760, a bravura work full of heroism and energy. By contrast, the opening motif of the D940 is elegiac and wistful, a distant horn call accompanied by murmurings in the lower register. In the hands of the pianists on this recording, the mood is melancholy, almost desperately tragic, yet tinged with great tenderness. Typically of Schubert, the mood soon takes a volte face with a new, more hopeful motif in the lower register, and throughout the work there are contrasting shifts of mood from poignant and heart-rending to dramatic, longing, intimate, charming and dance-like, and characteristic shifts between minor and major. The textures, shared between the two pianists, give the work an inner richness, and the reprise of the first theme is a touching reminder of the work’s underlying sadness.

This piece has, on occasion, reduced me to tears. When I was fortunate enough to hear it performed live by the artists on this disc, during Maria João Pires’ memorable Wigmore Hall residency in 2007, I think I cried through almost the entire performance, moved not only by the music, but also the fact that I was in the presence of an artist whom I greatly admired and respected (and continue to).

Rondo in A Major, Op. 107, D951, “Grand Rondeau”
The other work for four hands on this double CD recording is the Rondo in D951, which provides a delightful salve after the emotional impact of the D940. Maria João Pires also plays one of the earlier sonatas, the genial D664 in A, while Ricardo Castro opens the second disc with the D784 in A minor, which shares some of the same emotional territory as the D940 in its sombre opening statement and dramatic Beethovenian gestures throughout the first movement. The final work on the disc is the dramatic Allegro in A minor, D947 “Lebensstürme”, also for four hands.

Piano Sonata in A major, D664 – 3rd movt
Sonata in A minor, D784 – 1st movt
Musically and emotionally Pires and Castro seemed conjoined in the works for four hands on this album, while Pires’ solo performance in the Sonata in A is tender and delicately shaded. Between them, the two pianists on this disc give a sensitive and passionate reading of some of Schubert’s finest music for piano.