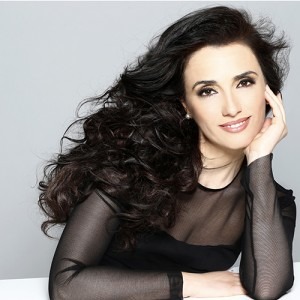 Just out of the window of the coffee shop where I meet Ermonela Jaho, I can see the towering pillars of the facade of the Royal Opera House, where a couple of nights ago she was singing the lead role in Puccini’s Madame Butterfly. One of the most in-demand sopranos of this generation, Ermonela has already graced the stages of the Sydney Opera House and Covent Garden this year, and can be heard at the New York Met and Théâtre des Champs-Élysées in Paris next season.

When we speak, there are still a few performances of the Puccini left, one of Ermonela’s highlights of which was working with Antonio Pappano. She speaks about this production with a palpable excitement, having been in the pipeline for four years, giving her considerably more time to prepare for the role of Cio-Cio-San than when Ermonela first met Pappano in 2008, when she flew to London at the last minute to replace Anna Netrebko in La Traviata.

‘He made me feel like it was the first time I was singing that piece. In that moment I realised what it takes to be a great conductor. Everything has a meaning beyond the notes.

‘The voice is something that comes from your soul. The sound has to give something, an emotion. Ok, it might sound beautiful the first time, but after that we need something else. You have to be believable. He opened another page of my career – I saw music with other eyes after that.’ 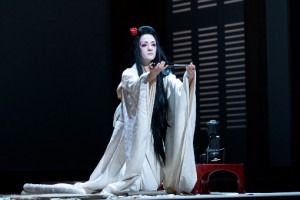 Ermonela has always had a strong connection with La Traviata – it was the first opera she heard as a child, and the piece that ignited in her the passion to become an opera singer.

‘I can’t find words to describe it. It was something magical, like falling in love. I knew at that moment I had to sing La Traviata at least once in my life.’

Following a dream such as this while growing up in her native Albania was not easy – even while studying in Italy Ermonela was babysitting in her spare time to get by.

‘There were points where I thought, ‘Oh my god, I need to quit,’ because it was so hard, but I could only last one night. I just couldn’t give up. It was something that I needed – but it was difficult to make it work. It’s still hard work, every day. Not only technically, but musically and in terms of life experience.’

For this reason, Ermonela makes time away from her work. She (perhaps understandably) seldom listens to opera – only occasionally to symphonic music, and jazz. She enjoys going to the gym every day, and walking and exploring the town she’s currently in – ‘I like to see real life on the streets. I don’t go shopping!’ she laughs.

Reviews of Ermonela’s performances often speak of her incredibly physical engagement with her roles. I ask her about how she goes about achieving this night after night.

‘Still now, I’m shaking before I go on stage. Every day is different, every day you have to find something new to give. In life, every day is different, and so this is how I approach the music. In theatre, it’s a duty for all artists to work together and leave the ego. Ok, you prepare yourself in your studio, but on stage you have to work as a team. That’s what makes the magic moment.

‘Life experience is important, the connection with people, because in the end you are singing for the people, and for this connection to resonate you need to be honest, true, to open your soul. 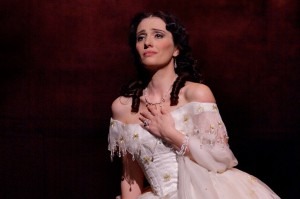 ‘Sometimes we want to adapt ourselves to be nice because society wants us to, but sometimes then we lose our personality, our strength, especially women. Culture is often patriarchal – you have to have the strength to believe you’re worth it – to scream to the world that even if you’re a woman, you can do more than what you’re expected to. That’s the connection I search for every time.’

Ermonela constantly strives to communicate this message of openness, including in a couple of recent masterclasses she gave at the Royal Academy of Music in London.

‘It takes so much. That’s why I talk in an open, honest way when I see young singers. They see this glamorous world with pictures everywhere… but you have to tell the truth, about what you went through, and be honest, even if something not nice happened in your life. They need to know the truth – and the reality to do this job is completely different.

‘If you don’t open yourself up, it won’t work. When I sing, I see myself. It’s a duty, to speak the truth and say how much it takes. Maybe you’ll feel hurt sometimes, but the feeling of being hurt goes inside so deeply that you connect immediately with everyone. The truth, the openness, the honesty – it takes courage.’