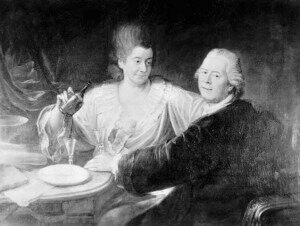 He was 36, an internationally acclaimed but impoverished composer of opera. She was 18, daughter of a wealthy merchant and banker, and a member of the circle of ladies in waiting who surrounded Empress Maria Theresa. It is not known how and where Christoph Willibald Gluck met Maria Anna Bergin, but they certainly fell in love. Given their rather substantial age difference, and the fact that his daughter was destined to inherit all his money, it was hardly surprising that Daddy Joseph Bergin vehemently opposed Gluck’s engagement to his eldest daughter. Joseph Bergin might also have been aware of persistent rumors that Gluck had been “medically” compromised. In polite society this normally suggested that he had contracted some sort of venereal disease. And Joseph Bergin was not shy in telling everybody the following story!

When Empress Maria Theresa substantially reduced expenditure on Italian opera in Vienna, Gluck had no hope of obtaining an official position. As such, he rejoined the Pietro Mingotti opera troupe in Hamburg as principal conductor in September 1748. Among the members of the Mingotti troupe was the beautiful buffa singer Gaspera Beccheroni, who had been the mistress of John Wyche, English Minister in Hamburg. When he was recalled to London in 1748, Beccheroni needed a new protector, and Gluck, chased into exile by Joseph Bergin, apparently needed a lover. The tour proceeded from Hamburg to Copenhagen, but Gluck and Beccheroni stayed behind and only joined the company at the end of November. Immediately upon arrival, and towards the end of the usual incubation period for syphilis, Gluck fell seriously ill and had not recovered by mid-December. Beccheroni was not exactly the most popular member of the opera company, and her affair with Gluck did nothing to endear her to her colleagues. The ensuing internal friction forced Beccheroni into the arms of her next lover, while Gluck established contact with Mingotti’s rival, Giovanni Battista Locatelli. Gluck soon started to travel with the Locatelli troupe, and the 1750 Carnival season saw his opera Ezio, with a libretto by Metastasio, first performed in Prague. True love, however, cannot be kept apart indefinitely. So the gods intervened, and Gluck got the very good, and unexpected news that Joseph Bergin had died!

Gluck hurried back to Vienna as quickly as he could, and work began in earnest on a suitable marriage contract and prenuptial agreement. “Herr Christoph Gluck,” we read “has duly requested the hand of the spinster Bergin and with the approval of her mother and her guardian has received her consent to become his consort in marriage, and after this betrothal has been confirmed by both persons orally and by a clasping of hands as also by an exchange of rings and a priestly benediction, the following worldly provisions shall be made. The said spinster promised to endow the bridegroom from her own means with a true and lawful dowry of five hundred Rhenish gulden after the wedding day against quittance, to which the aforementioned bridegroom makes a counter-settlement of one thousand Rhenish gulden, so that the marriage portion and counter-settlement together shall be one thousand five hundred gulden. Both parties are agreed that the remainder of the bride’s property of four thousand gulden, say 4000 fl., is to be safely invested and the yearly interests accruing — apart from a hundred gulden which have been expressly reserved for the free and personal use and disposal of the bride — shall be employed for their joint economy, whereas whatever is earned, acquired or inherited by the grace of God during the marriage shall be common property.” With all financial preliminaries settled, Gluck married his sweetheart Maria Anna in the Ulrichskirche on 15 September 1750, and the happy couple moved in with his mother-in-law. The union was a happy one, and Maria Anna remained utterly devoted to her husband until the end of his life. She also took a close personal interest in all his artistic plans and achievements. In addition, her connection with the Viennese court allowed Gluck to ponder and address the fundamental problem of form and content in opera with a series of radically new works that reformed the dramaturgical practices of opera. More on this, next time!