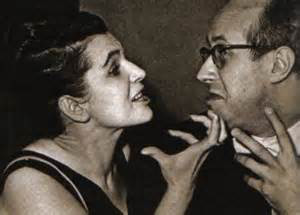 Music lovers adore their favorite divas. One high C and we are smitten. It is no surprise that sopranos have their share of musical sweethearts.

Russian cellist Mstislav Rostropovich, one of the greatest cellists of the 20th century, was charmed by a soprano. “Slava,” is best known for his captivating personality and performances of enormous breadth. He premiered over 100 works, a huge number of which were written for him, including among others, cello concertos of Shostakovich, Henri Dutilleux, Lutosławski and Prokofiev.

Ropstopovich married the famed soprano Galina Vishnevskaya in 1955 after a whirlwind romance. Their passionate, sometimes stormy relationship endured until he died in 2007. A dark-haired beauty with a magnetic allure, she sang at the Metropolitan Opera, the Royal Opera House and La Scala. Benjamin Britten wrote the soprano role in his War Requiem for her. The couple frequently performed together, Rostropovich either at the piano or on the podium or playing the cello as in the case of Villa-Lobos’ famous Bachianas Brasileiras No. 5 for soprano and eight cellos. Their recording of Shostakovich’s opera Lady Macbeth of Mtsensk is electrifying although her fiery temper and outbursts during sessions, befitting any diva, were legendary. 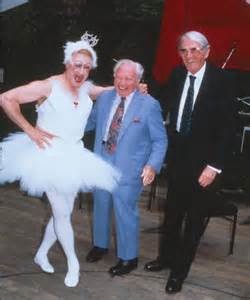 A fierce and outspoken defender of human rights and artistic freedom, he and Vishnevskaya were dismissed from prominent positions and ultimately exiled from their native country, their citizenships revoked. They settled in the U.S. where Rostropovich turned to conducting. He was the music director of the National Symphony from 1977 to 1994 but he continued his activism travelling to areas of conflict. His playing while the Berlin wall was being torn down was widely publicized.

Rostropovich was effusive and often showered his performers, both men and women with sloppy kisses. He could be impish and a practical jokester. To the chagrin of the performers Slava was caught gluing racy centerfolds into the center of his musicians’ sheet music, and during Saint-Saëns’ Carnival of the Animals for the Isaac Stern 70th birthday celebration, Rostropovich appeared dressed in a tutu, white tights and a tiara.

Vishnevskaya, a force herself, was featured on screen in the documentary Elegy of a life: Rostropovich, Vishnevskaya, opened her own opera-theater in Moscow, and she published a memoir, Galina: A Russian Story.

The Rostropovich-Vishnevskaya Foundation to “promote the health and wellbeing of children in need through sustainable, transformational public health programs in countries around the world,” has helped millions. They were passionate about art and amassed a priceless collection, which is now in Russia as a tribute to their enormous influence. 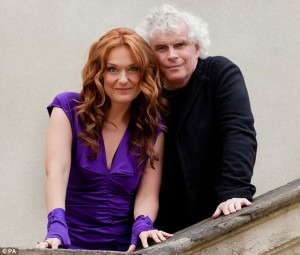 Sir Simon Rattle, conductor of Berlin Philharmonic was enchanted by Czech mezzo-soprano, Magdalena Kožená, the hot blond with a striking voice. They met at Glyndebourne in 2003. He was conducting Mozart’s Idomeneo—she was singing. International press and rumormongers had a field day. The ensuing affair between the ravishing singer and the curly-haired maestro ended both of their marriages but had a happy ending. Rattle and Kožena now have three children, and they collaborate often. Being married to the conductor certainly has its advantages. “It’s a relief, knowing I don’t have to be scared of the big maestro figure.” Rattle will be at the helm of the London Symphony in 2017, but only for four months a year as his family, he says, comes first. 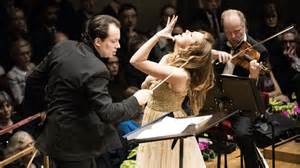 Andris Nelsons was recently appointed to the Boston Symphony and begins his role with the Gewandhausorchester Leipzig, during the 2017/18 season. Born into a musical family, he met fellow Latvian, soprano Kristine Opolais, also a stunning blond, when he was conducting the Latvian National Opera. They fell for each other and married in 2011.

A funny thing happened when Opolais performed at the Metropolitan Opera in Puccini’s opera La Bohème. She had just triumphed in a different Puccini opera, Madame Butterfly at the Met. The partying had lasted into the wee hours and she didn’t get to bed until 5:00 a.m. But the phone rang at 7:30 a.m.— could she substitute for an ailing soprano and sing the lead of Mimi in La Bohème in five hours, for the 1:00 pm matinee under the baton of Stefano Ranzani? Without any idea of the staging? Why not? She hurried over. There was instant chemistry with wonderful tenor Vittorio Grigolo. Good thing—it was one of the live in HD cinema broadcasts. 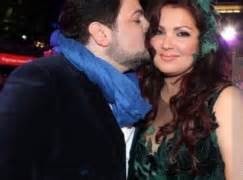 Joining Nelsons at his inaugural concert as Music Director of the Boston Symphony Orchestra in 2014 Opolais performed the Act I Finale from La Bohème. Their sizzling rendition seemed telepathic.

The major love news is that Anna Netrebko, perhaps the most impressive prima donna on the planet, said Yes! in Vienna. She and tenor Yusif Eyvazov celebrated their engagement at the Salzburg Festspiele and their wedding, covered by International press, took place late December at the splendid Belvedere Palace in Vienna. Fireworks followed. Equally comfortable in the opera house or in concert, Nebtrebko’s mesmerizing stage presence and stupendous, effortless singing has taken the world by storm and her CD’s have hit the top of the charts. Nebtrebko’s previous relationship to baritone Erwin Schrott (they were never married) broke up due to hectic schedules, which didn’t allow them to be together. But Yusif is confident. “We quickly realized that we are meant for each other.” Hear them together in Puccini’s Manon Lescaut. They’re hot. Happy Valentine’s Day.