Blog
The Day After the Concert…
by Frances Wilson April 13th, 2017 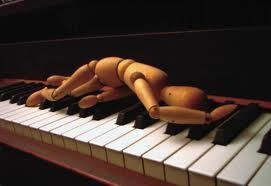 I don’t perform that frequently – maybe four or five times a year (excluding informal performances and “house concerts” at home) – but I understand the “process” of performing and the necessary and special preparation which goes into a public performance, not only the learning and refining of all those notes, but also understanding how to manage performance anxiety and hone stagecraft.

Anxiety is a natural part of the performance experience and should be accepted as such. For a long time performance anxiety or stage fright has been the “dirty secret” of performers, but recently a number of articles and books on the subject have revealed that it is common amongst even top international artists, which has, I think, made it easier for performers to speak openly about anxiety and nerves, and to offer coping strategies.

The physical symptoms of anxiety are the result of the release of adrenaline, a hormone and neurotransmitter, which is produced when we find ourselves in stressful or exciting situations. Known as the “fight or flight hormone”, it works by stimulating the heart rate, contracting blood vessels, and dilating air passages, all of which work to increase blood flow to the muscles and oxygen to the lungs. This gives the body an increased and almost instantaneous physical boost. In a performance situation, the side-effects of adrenaline pumping through the body include racing heart or palpitations, sweating, breathlessness and trembling or shaky hands, arms or legs. It also brings a heightened sense of awareness and increased respiration which can make one feel light-headed or dizzy. Fighting the symptoms of anxiety can simply make it worse, and many performers find it easier to manage nerves by simply accepting them as part of the performance.

The symptoms of the release of adrenaline do not leave the body the instant the stressful situation ends, and when one is not actually in a genuinely dangerous situation, the effects of adrenaline can leave one feeling jittery, restless, irritable, depressed and sleepless. In the immediate aftermath of the performance, you may continue to feel excited, “on a high”. Many people find it beneficial to “work off” the adrenaline rush after a particularly stressful situation (the classic musical example perhaps being the rock star trashing a hotel room after a gig!). It can take several hours for the body to settle down and the day after the concert, and one can feel very flat as adrenaline leaves the system and hormone levels return to normal.

The euphoria of live performance is matched by a special kind of depression compounded by a deep tiredness after the event. A vast amount of energy – mental and physical – is expended in the experience of a performance, and the excitement of the concert fills every moment in the hours leading up to it. And then, suddenly, it is all over. Now you’re ready for bed, but you’ve still got to do the PR thing post-concert: meet people, sign programmes and CDs, give interviews.

The day after the concert everyday life can seem exceedingly inferior to the excitement of the performance. In reality, there’s no time for exhaustion: you have work to do tomorrow – and work really is the best antidote to these feelings of depression and tiredness. There may be another concert to prepare for, new repertoire to be learnt, old repertoire to be revived and finessed. We draw strength from our love of the repertoire, our excitement about our individual pieces and the prospect of putting them before an audience. The performance is what endorses all the lonely hours of careful practice and preparation.

“At this low point, we have only to let music itself take charge. For every challenge we can possibly want lies before us in the vast and inexhaustible repertory that cannot but replenish our spirit. For true musicians, depression is temporary because their music is permanent.”

(Seymour Bernstein, from ‘With Your Own Two hands’)