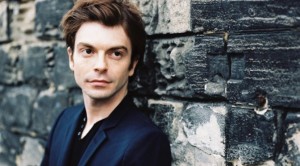 Having just landed from a whirlwind trip to Aspen, David Kadouch grabs a couple of days of respite before heading to Hong Kong this month to perform Saint-Saëns’ second Piano Concerto with the Hong Kong Sinfonietta, and the Franck Piano Quintet with Luu Cheuk-yin Clement, Le Hoai-nam, Chan Tsz-Shun Elvis, and Chang Pei-chieh.

David is not a fan of the travel itself, but it’s all worth it at the destination. ‘I like meeting people,’ he muses. ‘I guess with experience I tend to understand that when someone invites a pianist, because there are so many pianists, usually it’s because they really want that person.

‘It’s rewarding to think that way, that you’re there not by coincidence, that someone really wanted you there. It’s kind of a gesture of love. I feel very lucky to be there, and I value that more than anything else.’

David’s fascination with the piano began aged five, when his mother would play a recording of Beethoven’s third Piano Concerto in the family’s living room. Nina Simone also made regular appearances in his musical upbringing, and nowadays, alongside his classical interests, David’s musical tastes remain as varied, occasionally going to electro gigs with his friends. ‘I don’t listen to it that much,’ he says, ‘but it’s good to have this window into another world.’ 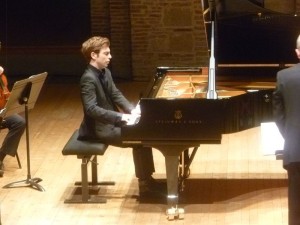 He regularly listens to recordings of his colleagues’ work, and has a long list of inspirations, including Martha Argerich, Daniel Barenboim, Radu Lupu, András Schiff, Yuja Wang, and Kirill Gerstein.

‘It gets kind of stressful, that’s why I listen to lots of other pianists. There are so many versions of every piece that you play that you have to keep up with what’s been said about that piece.

‘Everybody has their own voice, so you’ll never repeat anything, but it’s important to know that when you hear a version you have an evolution of your thinking, of how you can do things differently. I never copy,’ he laughs, ‘it just gives you more freedom.’

David brings this flexibility of approach to chamber music. ‘Right now,’ he says, ‘I feel like through my music I propose my own version. If that person brings something I’m very happy – I just let people play more. You don’t have to say much – people understand. If they don’t understand you won’t change that; just playing together normally does the trick.’

Whether it’s a violin sonata, or a piano concerto, David stresses that the most important thing is being open to new ideas. Speaking of disagreements with conductors, he states, ‘This job is not about fighting. You can never impose musical ideas. It’s just about accepting, being open.

‘I find that if you fight there’s no middle ground, but if you don’t fight, usually during the concert there’s this kind of generosity that comes, people compromise without even saying they will. At the end of the day, you want to give pleasure to the audience, and give a good concert.’

Off the platform, David finds time to exercise, and finds a Crossfit box wherever he can. The normality of exercising is hugely beneficial – ‘Whenever I travel I try to take care of myself. I’m always inside my head, so it’s a good way to let the stress out. It makes me feel normal, to be aware of my body.’

Tickets for David’s concerts can be found here.