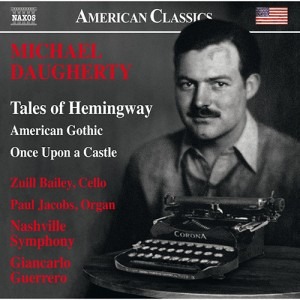 Tales of Hemingway: III. The Old Man and the Sea

From DAUGHERTY, M.: Tales of Hemingway / American Gothic / Once Upon A Castle (2016)

Daugherty: Tales of Hemingway: III. The Old Man and the Sea

GRAMMY® Award-winning composer Michael Daugherty creates colourful musical portraits in this recording, featuring larger-than-life personalities drawn from 20th-century American culture. Tales of Hemingway is a dramatic cello concerto, evoking the turbulent life, adventures, and literature of author Ernest Hemingway. American Gothic is a dynamic concerto for orchestra, reflecting on the creative world of Iowa artist Grant Wood. Once Upon a Castle is a virtuosic sinfonia concertante for organ and orchestra, inspired by the rich history of the Hearst Castle, built high upon the California Pacific coast by billionaire Randolph Hearst, the subject of Orson Welles’ film Citizen Kane. Under the baton of Music Director Giancarlo Guerrero, the GRAMMY® Award-winning Nashville Symphony is joined by Zuill Bailey, one of the leading cellists of his generation, and GRAMMY® Award-winning organist Paul Jacobs.