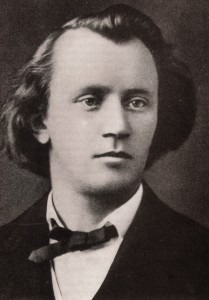 Born in Hamburg, Johannes Brahms was looking for a professional appointment in his native city early on. In fact, he applied for the directorship of the Hamburg Philharmonic Concerts in 1862 and again in 1867. The result was the same, as he was turned down in favor of Julius Stockhausen. For Brahms, the rejection “was a blow which he never forgot, never forgave, and in some personal sense never overcame.” Clara Schumann commiserated, “it does happen so often in life that what seemed so harsh, leads to good fortune later on.” In 1894, roughly 30 years after the initial rejections, it was the Hamburg Philharmonic knocking on Brahms’ door and offering him the post of music director. With a sense of vindication, Brahms replied “There is not much that I have desired so long and so ardently in its time—that is, however, at the right time. It has taken a long time for me to get used to the idea of having to go along other paths. If things had gone according to my wishes, I would perhaps celebrate an anniversary with you today.”

Clearly, Brahms was not at all happy, and the politicians of Hamburg kept scratching their heads of how to honor Europe’s most famous composer. Since 1813, the city had awarded honorary citizenships to a number of high ranking political figures, including Otto von Bismarck. But there was a catch, as this highest decoration was reserved for non-Hamburg citizens. It took a good bit of political ingenuity, including confirmation by the state parliament, before Johannes Brahms was nominated in 1889. The official invitation to Brahms was offered under the heading, “through the outstanding works brought honor and glory to his native town,” and the composer was dutifully reminded that this honorary citizenship could be revoked at any time, and bestowed no rights nor duties.

Johannes Brahms: Fest und Gedenksprüche, Op. 109
With all formalities agreed upon, the city of Hamburg naturally was looking for a musical thank you! And Brahms set to work on a cycle of three motets for mixed double choir. The score of the resulting Fest- und Gedenksprüche, Op. 109 (Festival and Commemoration Verses) is dedicated to Dr. Carl Petersen, the major of Hamburg. The premiere of the work was slated for the Hamburg Music Festival in September 1889, and Brahms sent the score to the conductor Hans von Bülow, who was doubling as the artistic director. Brahms writes, “For your music festival I have … three short anthem-like verses for eight-part unaccompanied choir, which are ideally suited to national celebrations and memorial days and which might well be dedicated to the days for Leipzig, Sedan and the coronation of the Kaiser.“ Although written to celebrate his honorary citizenship, the composition clearly references the political turmoil of the year 1888. In that year, the venerable Emperor Wilhelm I and his son and successor Frederick III had unexpectedly died, and the young Wilhelm II ascended to the German imperial throne.

1888 became known as the “year of the 3 emperors,” and Brahms was deeply affected by the royal deaths. Ever since the outbreak of the Franco-Prussian War in 1870, Brahms had campaigned on behalf of German national identity and unity. At one point, Brahms even considered enlisting in the Prussian Army! Fortunately, Brahms decided against a professional career as a soldier and for his honorary citizenship celebration turned to his collection of bible quotes to fashion hymns of praise and admonition for the young German nation. Collating texts from the Old and New Testament that sound a warning against the perils of discontinuity and promote the rule of law, Brahms reinforces the textual allegory by using archaic musical models. In this case, he was looking to the poly-choral practices of the late 16th century Venetian school to underscore his point. And when we consider that roughly 400 singers participated in the premiere performance on 9 September 1989, the Fest und Gedenksprüche surely had the desired effect!