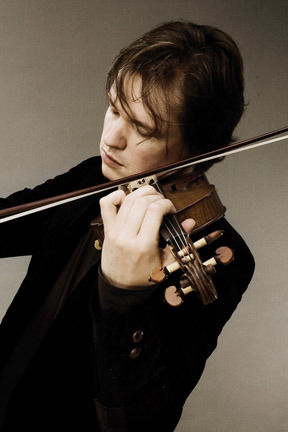 Norwegian violinist Henning Kraggerud joins the Hong Kong International Chamber Music Festival 2012 and impresses the audience with his slightly ‘different’ interpretation of Vivaldi’s Four Seasons and several other well-known repertoires. As a man who challenges traditional mindset, Henning is more concerned about musicality than musical correctness. Behind his charismatic performance, there stands a literature enthusiast who pays respect to different cultures in the world with curiosity. Amidst the interview, a group of lavishly dressed banquet-goers passed by before us, to whom Henning instantly examined in fascination. “It is interesting to see different cultures in the world,” says the violinist- his blue eyes glittered with joy. In this conversation, Interlude’s Artist of the Month shares with our readers some of his personal sides.

How do you like this collaboration with PPHK, Cho-Liang Lin as well as all the musicians in the Hong Kong International Chamber Music Festival 2012?

I have known Jimmy for a while – we met during our performance in La Jolla Festival in California. It is my pleasure to work with him again. In fact I have also met a couple of other featured musicians previously, but not all. In a chamber music festival, you always run into old friends and meet new musicians – together, you make good music.

What do you usually do before a concert?

Usually, I would sleep during the day and then get up two hours before concert to get ready. I would also have a big lunch and then just nibble slightly before the performance. However, it is impossible to have such luxury when you are playing in a chamber music festival because you would always have a busy schedule.

How do you start your daily practice on the violin?

I always start with improvisation – no scales. I improvise until I feel ready and free, until there is no delay between thought and sound, until music flows naturally.

I do not believe in what violinists normally think. I always wanted to go back to the old days – when composers are musicians and musicians are composers; when improvisation was a natural element of music.

How does your violin sound to you? How would you describe its voice?

It has a voice of depth and width. I love the cello, so I always pick a violin with deep voice that sounds like a cello. In fact, I keep a six-stringed instrument called the viola con corde myself – it’s custom-made by a Brazilian artist. The instrument extends towards the note F, a fifth below the viola’s lowest note. There was this album released in June 2011 in which I was recorded playing the viola con corde. I always bring this instrument with me to concerts and use it for improvisation before my performance.

How do you want your music career to be like? Are there any particular goals you’d like to achieve?

I would like to have more time to compose and perhaps to travel slightly less, although I do not want to stop performing.

I like to perform with musical people. I prefer collaborating with open-minded musicians who are more concerned about having fun than playing correctly.

What makes a good violinist?

A good violinist is a person who can express his feelings through sound. It has very little to do with being able to play fast.

Were you born to a musical family?

Not to a family of musicians. However, my parents often took me to concerts when I was small. Also, they listened to music extensively at home.

What are the most important things your parents have taught you?

I think it is the appreciation of music and literature. Every evening they would spend about half an hour reading out great novels for me – works by old French masters as well as by famous Norwegian novelists. They have probably read about 300 novels for me during all those evenings.

Now I still read extensively. I have read most of Haruki Murakami’s novels- his 1Q84, Kafka On The Shores and The Wind-Up Bird Chronicle are my favourites. Besides Murakami, I also like Kazuo Ishiguro- his The Remains of the Days in particular. Other than that I also read a lot of English and Russian literature.

How did the violin enter your life? When did you discover your passion?

When I was around 7, I visited a shop with my mother where she met my violin teacher. Later that day my mother came home and asked if I would like to start taking violin lessons – and I replied “Yes!” without hesitation because my brother was playing the violin at school.

The first thing I wanted to do back then was to play all the pieces my brother did – much faster than he could. During that time I was more interested in playing fast- I had started for all the wrong reasons. But then my passion gradually came through and I grew to love music earnestly.

How long did you usually spend on the instrument each day?

I didn’t really count. Sometimes I spent very little time; sometimes I practiced for long hours – depending on how much I had to learn. When I was around 10 to 14, I used to spend most of my time on the violin – as long as possible. I hated school because it had taken away 7 to 8 hours of my day!

How was your life back then striving hard to become what you dreamed for?

I was very absorbed in what I was doing, so I always practiced before school. When school was over, I would run back home as quickly as my feet could carry me in order to practice more. I usually practiced until house regulation required me to stop – you know, after 10pm. So, I would say my life was busy back then.

What have you given up during childhood to achieve your aspiration?

Not having enough time to pursue other personal interests would be one thing, of course – but it was not too bad. I did not want my life to be something completely different, say, to become a scientist, so there was not that much for me to give up. Ever since childhood, I have always loved music. Composing music and playing instruments were pretty much all I was interested in since young.

What has kept you determined and persistent all the way through?

It was the love of music. I genuinely love music.

Have you imagined how your life would have been without music?

Yes, I think it would have been very empty. Without music, I could have ended up in the literature world instead. However, I would never be in the office doing numbers.

Can you list three of the most inspiring people in your life?

I would probably pick some composers – Janáček, Beethoven and Mozart. I could also have picked J. S. Bach, though at this moment I would name these three. If you ask me again tonight or tomorrow, I might give you another list- who knows?

What is your favourite colour?

It used to be blue when I was a little boy- but I am not so sure about it anymore. Now I like green and brown – natural colours from pastures and trees.

How do you divide time between family and career?

Most of the time, I try to make my tours short. Whenever I have rehearsals with orchestras, I would leave home as late as I could and then head back right after- in between three to four days at most I would say. This time I have spent ten days in the Hong Kong International Chamber Music Festival, it is slightly too long. But, it is still fine for me because I do not do this often.

As a violinist, what are your expectations on your children?

I want them to discover their passion. I would provide them with various opportunities to try different things and to explore different aspects of life. I do not want to push them too hard, although I do not want to be the opposite either.

Right now, both of my children start to like the violin a little bit. So I would let them try it out together. I will help them whenever they want, although at this point I do not teach them myself. They are still very young – my 5-year-old daughter will start taking lessons with a teacher pretty soon perhaps, whilst my 2-year-old son is just playing around and having fun with the instrument.

As a father, what are the things you hope your children can learn from you?

To be dedicated when they choose something to do, (please rephrase in a better way) and to give their best in it. I also want them to be fond of literature, to love what I read for them. In short, I want them to be able to live life fully- but this is only what I hope.

Could you share with us any future plans for album recording?

In a few months, I will be recording a new album on a set of pieces written for the violin and the orchestra by Nordic composers.

How do you feel about your life at this moment? Can you think of a piece that best describes the feeling?

That is a difficult question. Well, I would say Janáček’s Sinfornietta.