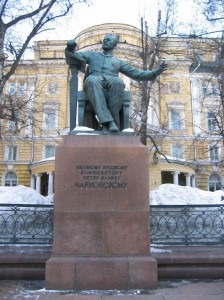 A year so dominated by the economic downturn in the West and the rise of China epitomized by the Shanghai Expo in the East, few may have noticed that this year marks the 170th birthday of Pyotr Tchaikovski, the great composer from 19th century Russia, a tsarist empire spanning both East and West and symbolized by a coat of arms of a two-headed eagle. Of Ukrainian descent and educated in St. Petersburg, Tchaikovski is widely considered as one of the greatest composers in the romantic period. He is commemorated with statues in Ukraine as well as in Russia, such as the one in front of the Moscow Conservatory (Fig. 1), and other places.


On the 27th of November, the Symphony Orchestra of the National Philharmonic of Ukraine conducted by Maestro Mykola Dyadyura came to Geneva and gave a concert at the magnificent Victoria Hall with a Tchaikovski-themed programme, which included the Nutcrackers Suite, the first piano concerto, and the sixth symphony. The event was held with the assistance of the Permanent Mission of Ukraine in Geneva and the Swiss Foundation «Esperia». It was attended by diplomats, members of various international organizations, and the Ukrainian community, in addition to the usual concert-goers and music lovers. An opening address was made by the Permanent Representative of Ukraine in Geneva, Monsieur Maimeskul, and a post-concert reception was held in the lobby. Given the nature of the event, it was not too surprising that the audience was very well dressed, perhaps even by Geneva standard.

The Victoria Hall in Geneva was built in the late 19th century and has been very well kept. Its richly decorated interior can arguably rival that of the Royal Albert Hall in London, but its size is much smaller and its shape basically rectangular. It has a gallery level of a semi-open design, except at the far front, which presumably was designed as a Royal Box for the British Monarch. To the French this must have appeared rather incredulous, but indeed the Victoria Hall was financed by the consul of England, dedicated to Queen Victoria and donated to the City of Geneva. For this reason, the Royal Arms of the United Kingdom hangs above the stage.

The concert platform is modernly-equipped with a stage elevator to transport a concert grand piano without disturbing the orchestra. However, the acoustics has not been equally modernised, especially under the deep balcony overhang, which was exacerbated by the relatively narrow plan of the Hall and a lack of side reflection.

The full size orchestra of the evening had a large string department. The cello section was relatively weak, and the sound produced lacked the depth and richness expected from one with a Slavic tradition. In contrast, the equally-sized viola section managed to impress. The standard of the violins varied but was generally of high calibre. The percussion section was competent, although it was at times susceptible to the common mistake of getting a little too easily excited, particularly in the long build-up sections such as in the sixth symphony. The woodwind and brass sections performed well and presented a confident start in spite of the cold weather.

The conductor successfully guided the orchestra through the various challenging passages, always remaining in command yet still managing to elicit the playfulness from the players. The different pieces, especially in the Nutcrackers Suite which was most delightful, were full of character, and from one piece to the next the contrast of characters was marked and highly commendable. The delicate parts were by and large very well attended to, and if there was anymore one could ask for, it would only be the handling of the tension building up sections in the sixth symphony which was not sustained successfully.

The soloist of the piano concerto, Igor Tchetuev, was clearly a highly competent pianist, as suggested by the biography and evidenced by elements in his performance. However, one could sense that the pianist was not playing at his full potential, perhaps stemming from the tight tour schedule with four consecutive nights of performances in four different cities. His technique was undoubtedly fluid and commanding, but there were places where loss of concentration and lack of effort rendered the performance too much a formality rather than a firework display, and the dance-like second movement lacked the lilt and fun.

All in all, the evening was a success. Subtly hinted by the second violinist, the audience gave the orchestra extended rounds of applause sufficient to elicit all the three encore pieces prepared, and everyone left the Hall in the gentle Alpine snow with a romantic Russian warmth.