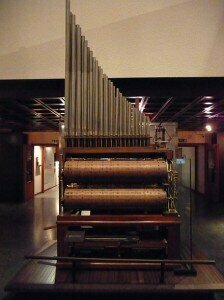 Reporting from a scientific exhibition in Paris, a musical journal in 1824 wrote, “the astonishment of the hearers was at its height when, after having executed a march with variations by Moscheles, the instrument was left to follow its own inspirations; the applause was loud and unanimous, and some exclaimed that it was altogether miraculous. Still, the more perfect the execution, the stronger the feeling of incredulity became, the result of which a general and decided opinion that the effect of the Componium could be produced only by some highly finished automaton.” It certainly came as a bit of a shock to listeners, that the Componium could apparently improvise or extemporize music as it played! Dietrich Nikolaus Winkel had invented this novel instrument in 1821, and the automatic organ featured two barrels that rotated simultaneously. Each barrel contained 8 versions of variations of an 80-measure piece, sub-divided into two-measure phrases and followed by two measures of silence. As the top barrel played two measures, the bottom barrel was silent. Then the order was reversed, and the silent barrel slid horizontally to activate one of the other seven variations. This sliding was governed by a randomizing mechanism similar to a roulette wheel, and the end result was a piece of coherent music that was nevertheless highly variable. 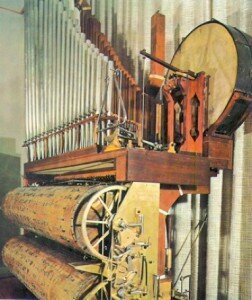 In fact, “the total number of possible variations is 53, 875, 981,680,676.” That’s a rather substantial number, and members of the French Academy were called on 2 February 1824 to verify that no human was hiding inside the instrument manipulating the levers. The scientist issues the following report, “When the instrument has received a varied theme, it decomposes the variations of itself and reproduces their different parts in all the orders of possible permutations. None of the airs, which it varies, lasts above a minute. Yet through the principle of variability which it possesses, it might without ever resuming precisely the same combination, continue to play not only during years and ages, but during so immense a series of ages that though figures might be brought to express them, common language could not.” If you don’t believe the scientific report, you can still inspect a componium in the collection of the Brussels Museum of Instruments.