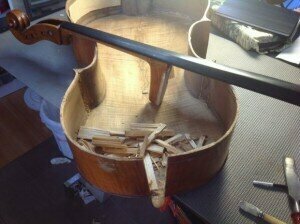 Accidents happen. If I trip while carrying my cello I make a split-second decision—save the cello, never mind breaking an arm! Sometimes, no matter what we do, our precious stringed instruments are damaged and we rush, heartbroken, to expert cello doctors, or luthiers.

Cellist Matt Haimovitz recently had such a decision to make. He was teaching a lesson, and a bit clumsily stood up to reach for the music to Francis Poulenc’s Sonata. He stumbled. Mid-air he contemplated falling on top of his valuable 1710 Matteo Goffriller cello, his companion for thirty years, or letting it go, come what may. He released the cello, the sound of splintering wood like a knife thrust into his own chest.

Once the team of luthiers at Reed Yeboah Fine Violins in New York had a look they had to do the unthinkable. They took the top off, and disassembled the exquisite cello. Matt couldn’t watch. It felt like a dismemberment. Certain things start happening when you’re 300 years old: cracks reopened, the top caved dangerously inward, and the soul of the cello, the soundpost—a little wooden dowel that conducts the sound from the top to the back—had to come down. It would take months to repair. 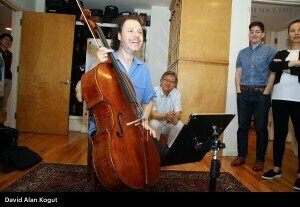 Haimovitz visited as often as he could. Finally, in September, after a year of surgery, the cello was ready for a trial. It certainly looked perfect, but when Matt sat down to play, squeaks and squawks emanated. Luthiers know string instruments need to be played and when they are dormant, they lose their voice. With encouraging gestures, they persuaded Matt to perform different works, older and newer, louder and softer, higher and lower, and to try a different bow. The cello, after all, had to recover from distressing injuries. In time, the cello’s glowing baritone sound emerged as if from a deep sleep. The pair, reunited, have formed an even richer bond.

Tariq Abdul Razzac, a resident of Calgary, has a hair-raising story. His cello saved his life. A member of the Iraqi National Symphony Orchestra in Baghdad, he had the audacity not only to play a concert but to perform at the U.S. Embassy in Bagdad. Which was the greater crime—playing music or collaborating with the west? As Razzac left the concert, with the cello in its forest green case strapped on his back, Iraqi militants began shooting at him. The whizzing bullets punctured the case virtually shattering the cello but Razzac was safe. Over the ensuing months Razzac made several futile attempts to repair the instrument himself using wood scraps to patch the broken pieces. The wreckage sat in the bullet-ridden cello case for three years. 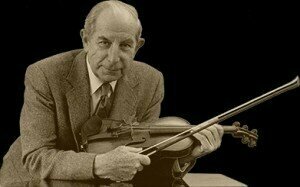 In March of 2018, the dangers had escalated in Iraq. Razzac and his family made the decision to flee to Calgary, Canada, the cello pieces in tow. Razzac’s story resonated with a former Calgary Philharmonic cellist, who knew the right man for this delicate undertaking— Natanael Sasaki the local luthier. Sasaki, a native of Finland felt a special kinship with Razzac, having also emigrated, and he found the task of bringing this instrument back to life after saving its owner’s life, a labor of love. He refused payment for his expertise. When word spread of this endeavor, other members of the music community tried to help out. Toronto’s Bosco Violin Supply donated material worth hundreds of dollars. Both Razzac and Sasaki were on tenterhooks during the entire six months of the restoration. Bullet holes in the cello and in the case, had to be sealed. Wood splinters had to be cleared out of the inside of the cello. Water-soluble glue had to be used sparingly for the seams of the instrument to allow the cello to contract and expand with the severe weather in the northern city—otherwise the body of the instrument could crack. The intensive care worked. Razzac now plays in the Calgary Civic Symphony and the cello sings again.

Violins also need to go to the specialists from time to time. A remarkable instrument was recently restored—The Ames-Totenberg 1734 Stradivarius violin. Roman Totenberg , a fantastic violinist and pedagogue, performed on this instrument for 38 years. Then tragedy struck. While Totenberg was greeting audience members after a concert at the Longy School in Massachusetts, the violin was stolen from his office. He never saw it again. Phillip Johnson a young, second-rate violinist who hung around that day, was suspected of taking the violin but there was no proof. He eventually moved across the country. Four years after Johnson died in 2011, his widow found the violin locked in a case. After breaking the latches, she was astonished to see a Stradivarius label. Experts, were skeptical. Who doesn’t think granny’s old instrument in the attic is a Strad? They arranged a meeting, identified the violin as the missing instrument, and summoned the police—but too late for Totenberg. He had passed away at the age of 101 in 2012. 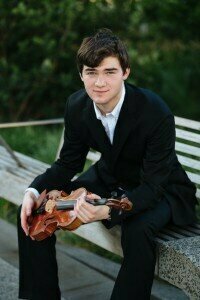 Bartok: Violin Sonata, BB 124: IV. Presto (Roman Totenberg)
The instrument would have been recognized if Johnson dared take it out of his apartment, so for 35 years the violin didn’t have even a routine physical. Rare Violins of New York completed the two-year painstaking restoration. The Totenberg sisters knew their father would have wanted the violin to be in the hands of a virtuoso player, heard by audiences everywhere, and not relegated to a collector’s glass case. As luck would have it, an anonymous benefactor purchased the violin, with the stipulation that the Strad would be loaned to a deserving young virtuoso, overseen by the newly formed Rare Violins In Consortium Artists & Benefactors Collaborative.
The first recipient, a student of Itzhak Perlman, has already performed the world over. Eighteen-year-old Nathan Meltzer, is up to the challenge.