There is so much in music that is subjective and open to personal taste and interpretation. In order for us to play convincingly, we have to develop an interpretation that is meaningful TO US vivid in all its details. Unless we are convinced by what we are doing, we are unlikely to convince our audience

I recently did an interesting exercise with all of my students (young people whose ages range from 14 to 18) in which we examined and played a short piece of contemporary piano music by British composer Paul Burnell called ‘Just Before Dawn’. At this stage, I gave the students no more information about the piece other than the score before them. 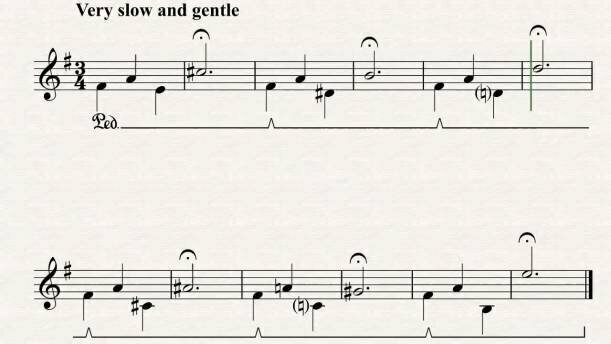 On first sight, the music looks both incredibly simple, yet also slightly confusing since there is only one stave with an arrangement of notes whose tails point both up and downwards. Most early and intermediate piano students may not have encountered a score like this before. Initially, I asked each student to sight-read the music (the notes are not difficult). This in itself presented a challenge to a couple of students who found their left hand creeping down into the bass to play the notes whose tails pointed downwards. At this point, I simply highlighted the fact that there was only one stave marked with a treble clef and then left the student to work out how the notes should be shared between the hands.

After the piece had been played through once, I read the student the composer’s programme note for the piece:

The music attempts to evoke a magical time just as summer day is about to break, but when the stars can still clearly be seen in the sky

I then asked the student to play the piece again with the composer’s description in mind. The result was 12 distinct versions of the same piece – descriptive, expressive and personal. I then asked each student how they felt the composer indicated particularly aspects, such as the rays of the sun or the stars still visible in the sky. Some students felt the dotted minims with fermatas represented the sun, while others thought these notes were the stars still twinkling in the sky. One student referenced John Cage when we were discussing the simplicity of the music; the same student couldn’t believe I was playing ‘Just Before Dawn’ in a concert the day after his lesson and queried why one would play something “so easy” in a public concert. This led on to an interesting conversation about what constitutes “difficult” or “easy” music and what kind of music is “appropriate” for public performance (the subject of a separate article).

I found the exercise really interesting for it offered an intriguing insight into the notion of musical “interpretation” and how one’s personality, perception, musical knowledge/musicality, life experience and maturity comes into play when we make music. As I said to each student, “there is no right way, I’m simply interested to hear what you make of this piece“. When I went to perform the piece in a public concert myself, my students’ individual performances and perceptions of the music came to mind and I found myself shaping the music in a different way. This leads to a wider consideration of why it is interesting to hear a variety of performers playing the same works – for example Beethoven’s final piano sonatas or a Bach keyboard suite – for no one performance will be the same as another, as each pianist brings their own distinct character and to the music.