Media
Can you learn to love music you hate?
December 6th, 2013
Tags: audience 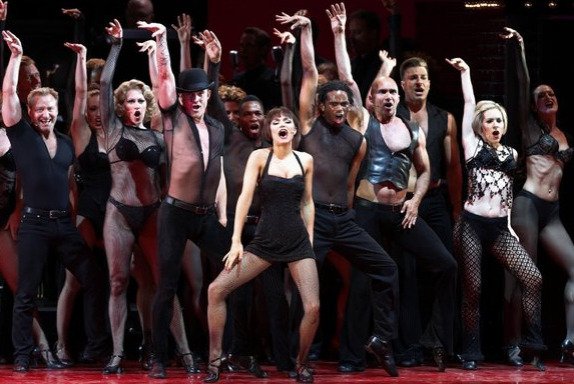 ‘Chicago’
Samantha Barks, center, as Velma Kelly in the Los Angeles Philharmonic’s performance of the musical “Chicago,” directed by Brooke Shields, with musical director and conductor Rob Fisher at the Hollywood Bowl.

A music buff tests the theory with a challenging playlist. Atonal music, anyone?

Concert music: I’m supposed to embrace it all. As the socially lucky offspring of professional pianists, I have survived music school, performed songs for actual money and worked in radio as well as a critic passionate about today’s composers.

That said, I keep a dark secret: There’s a fair amount of music I cannot stand. Stuff from many eras that I’ve wondered whether I could ever learn to love.

As with a lot of people who worship or hardly know the standard concert repertoire, I’m turned off by some dissonant music.

But “dissonance” is not just an objective quality; it’s subjective, personal. Why some compositions give migraines and some intrigue or move me is a matter of taste.

For me, as a music advocate, it’s just been perpetually vexing that I can’t love some works considered important.

Then, in February, I read news reports on an Australian study about how through listening we can grow to appreciate sounds we consider tonally difficult and with which we may lack aural experience. I heard a challenge.

Despite a life of listening to atonal chords, unresolved lines, zigzagging polyrhythms, crunchy tone-clusters and often-maddening principles such as serialism (using the first 12 tones in the scale before one can be repeated), I would give this a try.

Could I teach myself via regulated music streaming, in a hardly scientific method, to love works that I would add to my “favorites” lists only with a gun to my head?

I quickly put myself on a possibly horrific listening diet.

I would now add challenging works that I hardly knew or that I had not heard for at least 10 years. I would listen to each in full, uninterrupted, at least twice a day for 14 days, at which point I might visit my headache specialist.

I began with Schoenberg’s 1912 “Pierrot Lunaire,” an influential if polarizing melodrama set to German poems. As the piece begins, a singer yelps and sighs expressionist phrases in a speak-singing (or Sprechstimme) style above the utterances of a chamber ensemble that counters her vacillating pitches with a variety of timbres and dismantled chords.

To me, the piece had always sounded like a hysterical woman falling off a muddy series of balconies, and the text meant little without German-language skills. Of course, I respect Schoenberg’s innovation. He gave Modernism direction. And I dig, among other things, his early, sonorous “Verklärte Nacht” (Transfigured Night, 1899) as well as his early atonal piano work “Drei Klavierstücke” (1909).

What’s more, I can certainly see, as history tells us, that “Pierrot” struck Stravinsky as world-changing. I just don’t connect with it. The only thing I enjoyed about the piece this time was how much it “entertained” my downstairs neighbor responsible for the second-hand smoke in my bedroom; he had banged on his ceiling during my streams in, say, collaborative response to the work’s anti-patterns.

I was glad to share. I’m that occasionally earnest guy on Facebook — assuming you have not unfriended me — who perhaps too often celebrates musician birthdays by posting links to specific recordings with lines about what they mean to me. Great music is my greatest love, next to a forgiving wife who bravely abides a man devoted to such popular, lucrative subject matter.

Next on my hideous playlist was a mechanically modern piece that erases the need for a human performer: Conlon Nancarrow’s “Study for Player Piano No. 7” (written between 1948 and 1960). I had been forced to listen to Nancarrow in college; a decade later, I had not considered it.

Nancarrow, who was born the year “Pierrot Lunaire” premiered, had studied with Schoenberg a bit but hated serialism. He grew up with a player piano and experimented with terribly complicated rhythmic interplay as programmed by the perforated paper rolls that make the instrument sound. Call this composer’s stuff very early robot techno with nods to jazz and South Asian scales.

Although fascinated by machinery, Nancarrow was more concerned with emotion than technique, however, and although I had once found him crazy-making, after just a few days of repeated listening, I came to love his freewheeling spirit and atonal overlaps. (Sadly, my wife, a doctoral candidate who adores modern classics, refused to stay in the room while it played.)

Throughout this experiment, I also grew more attracted to Stravinsky’s serialist ballet “Agon” (1957). I attribute this to an intense love for Stravinsky’s more popular tonal and nonserial atonal works, which rendered me engaged for life to his instrumental textures in any context. So this admittedly was a biased choice, although I remember despising “Agon” at 19 when I’d first played Stravinsky’s neoclassic “Pulcinella.”

What I still cannot digest, however, is the work of Italian composer Luciano Berio, an electronica pioneer, easily represented by his Sequenzas for solo instruments. I listened to a good lot, including “III,” for woman’s voice (1965) and “X,” for trumpet, commissioned by the Los Angeles Philharmonic in 1984. The latter is a tour-de-force for virtuosic trumpeters who flutter-tongue and doodle in the highest registers, but even on repeated listens, I found it too random; devoid of narrative or emotional sense.

Sadly, I can’t say this experiment changed my feelings about much of what I crave.

I try to consistently challenge my ears, but as we age, we gravitate to replaying what we fell in love with when our brains were spongier, and I already appreciate 20th-century music. Perhaps the best thing we can do, knowing that repeated listening will soften most of us to some sounds that push us away, is expose a larger audience to the language of contemporary music so that people won’t avoid a John Adams concert because they didn’t grow up playing Bach fugues or attending modern music history courses.

In fact, the new stuff, which we might not have without Schoenberg’s pioneering spirit, mixes well with today’s better popular music; let’s mash up those radio and Spotify playlists more, listen to the similitudes. Take the serious (inspired) music of the young composer Mason Bates, who is also an electronica DJ. Or that of Nico Muhly, who collaborates with all kinds of musicians, showing little concern for categorical genre-holes.

Or take none of this advice: Obviously, no one, regardless of exposure, training or even a role as a public music appreciator, needs to like anything, and that’s a sentiment that should be embraced more in the still-rigid concert hall. Hate Mahler’s Seventh Symphony? Walk out like you would at the Viper Room. Find Liszt unbearable? Shout or fight about it. We’re allowed to seize up to more than the thorny stuff, and a lot of these composers never suffered a fool or composer they couldn’t stomach. Let’s be human, real, about this subject, just like the people who wrote the tunes.

As for me and my musical stress test, it’s exciting that I now genuinely adore experimentalist player-piano works at a time when the iPad has become the dominant living-room keyboard instrument — and if nothing else, I have new tactics to employ when a daring soul breaks my building’s no-smoking rules.