Features
Bringing the Universe to the Concert Hall
by Maureen Buja August 1st, 2016 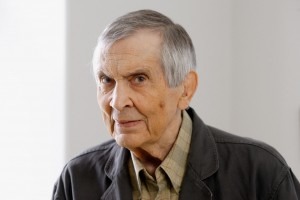 He taught at the Sibelius Academy off and on from 1957 to 1990, and over that time, changed his compositional style from a neo-classical post-war style through the 12-tone serial techniques popular at the mid-century to a more personal and mystical style. A work such as his Third Symphony (1959-60), written in the middle of his 12-tone period, tempers the usual austerity of the Second Viennese School with a more romantic touch.

Rautavaara: Symphony No. 3, Op. 20: I. Langsam, breit, ruhig (Royal Scottish National Orchestra; Hannu Lintu, cond.)
One of his most famous works was his Cantus Arcticus, Op. 61, of 1972. The work was commissioned by the University of Oulu, on the western coast of Finland, for its first doctoral degree ceremony. The symphony is notable for its use of bird recordings as part of the orchestral soundscape. In the third movement, Joutsenet muuttavat (Swans Migrating), the listener is positioned in the middle of the migration. The movement starts with the sound of the swans approaching and then the orchestral sound seems to swirl up to meet it. The swans fade into the distance at the end.

Rautavaara: Cantus Articus, Op. 61: III. Joutsenet muuttavat (Swans Migrating) (Royal Scottish National Orchestra; Hannu Lintu, cond.)
It was this use of nature within a mystic context that gave Rautavaara his unique sound. He became fascinated with the idea of angels and many of his later works are about angels. His Seventh Symphony, Angel of Light, uses the idea of angels not as physical beings but as mythical entities; in this symphony, they should be construed as radiating a pure musical energy. The second movement, Molto Allegro, contrasts a playful wind and brass line over which the high strings’ melody is an expressive contrast to all the twittering going on below.

Rautavaara: Symphony No. 7, “Angel of Light”: II. Molto allegro (Helsinki Philharmonic Orchestra; Leif Segerstam)
A recent choral work of his was his Christmas Carol, commissioned and written in 2010 for the men and boys choir of King’s College Cambridge. It was part of their Festival of Nine Lessons and Carols, held annually on Christmas Eve since 1918.

Rautavaara connected the late Romantic world of Sibelius with the modern age. After working through the prescriptions of composition at mid-century (12-tone and the like) he went further to expand the world of music into the world itself. His musical style is expansive, extending to the stars, but at the same time holds within it a certain introspection. We may be part of the world and the universe, but there will always be a part that is uniquely our own.