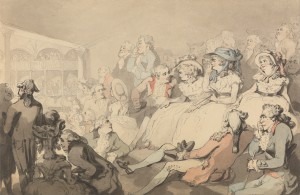 It happened again! During a performance of the Staatskapelle Dresden at the 43rd Hong Kong Arts Festival, an audience member showed his appreciation by eagerly clapping his way through the final pianissimo chords of Richard Strauss’s Metamorphosen. Other audience members loudly objected, the conductor was visibly annoyed, and HK’s chief executive left for intermission.

Richard Strauss: Metamorphosen, TrV 290
So what’s up with voicing appreciation or clapping in the concert hall and opera house? Until the beginning of the 20th century, applause between and during movements was considered the sign of a knowledgeable and appreciative audience. Mozart wrote in 1778 to his father: “Right in the middle of the first Allegro came a passage I know would please, and the entire audience was sent into raptures—there was a big applause. And as I know, when I wrote the passage, what good effect it would make, I brought it once more at the end of the movement, and sure enough there they were, the shouts of Da capo.”

And thing were even more tumultuous in the theater. Shakespearean plays were populated by “pits filled with men and boys, and the galleries contained a number of not too respectable women. Venders of nuts and fruits moved about through the crowd. The gallants were smoking; the apprentices in the pit were exchanging rude witticism with the painted ladies.” Contemporary reports detail that the La Scala Opera house in Milan was used for trading commodities during performances, and that apparently included livestock wandering in the aisle.

Things fundamentally changed under the influence of the quasi-religious atmosphere of Wagner performances at Bayreuth. Silence descended onto the house, and it was considered the height of audience sophistication. And when Gustav Mahler stepped onto the symphonic stage, things got really dicey. Mahler militantly opposed any clapping during movements or for favorite singer, and he routinely stopped performances. He even hired detectives to patrol the theater. But in the end, it was the conductor Leopold Stokowski who considered applause during symphonies an intrusion on the divinity of the concert experience, and that’s what he told his audiences. So where do we stand in 2015. As a rule of thumb, it might be a good idea to let other patrons listen to the music undisturbed. So if in doubt, sit on your hands or play with your mobile!