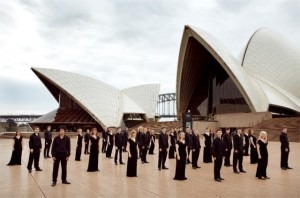 Some of the best choral discs, in my mind, have come from British choirs exploring repertoire outside of the English choral tradition. So many of the staples of the cathedral, church and college chapel diet have been recorded so many times that it seems impossible to think of anyone who could commit something different to disc. This is not to say that they will not, Cathedral and particularly chapel choirs change personnel in regular cycles, as singers move onto new positions, or simply graduate as in the case of college chapels. A new disc can capture a fresh timbre, a distinctive make-up of voices but too often it is familiar repertoire. Looking at the recent releases of two of Cambridge’s most famous choirs, you have to wonder the value of committing another version of Allegri’s Miserere to disc, or what another brace of Christmas albums does for the recorded catalogue.

The exploration of new veins of sacred choral music is not really a concern to a tradition that principally performs establish – canonic – music. A sudden explosion in commissions has occurred over the last ten or so years, mostly famously the annual King’s College carol commission. The first composer to be commissioned by Stephen Cleobury for the long running series was Lennox Berkeley, and amongst those who have followed him are Thomas Adés, Judith Bingham, James Macmillan and John Rutter. Now considered an essential part of musical life, commissioning new works has lost some of the aura it perhaps once had.

The Choir of Trinity College, Cambridge, has released some rather unusual repertoire on disc in the last few years. A complete disc of the choral music of Pawel Lukaszewski, a disc of David Briggs, a survey of Baltic composers, and most recently an album of American works entitled Beyond all Mortal Dreams are not typical college chapel or Cathedral Choir material. In the same way that commissions started an interest in contemporary music, one hopes that such records encourage other choral directors (and record labels) to explore new seams of twentieth century music.

The most recent disc is that showcasing little-known American composers whose distinctive and luminous compositions influenced better-known composers such as Morten Lauridsen and Eric Whitacre. Turning over to the rear liner, the majority of composers featured won’t be known to the majority of readers, the exceptions perhaps being Healey Willan and Stephen Paulus (the latter wrote a King’s College commission in 1996). René Clausen’s Tonight eternity alone, and the three Frank Ferko Latin texted pieces are a real discoveries.

Ferko, a leading scholar of Messiaen and Hildegard von Bingen, has a distinctive compositional voice that draws on his academic subjects. The three pieces form a challenging set of works for double choir under the title of Hildegard Triptych, and the references to the Christina mystic and visionary are numerous: the bare fifths at the opening of O vis aeternitatis in the conductus style, the florid melismas in O virtus sapientiae and the mysticism of Caritas abundant. An unexpected preoccupation with chant and chant techniques pervades a lot of the pieces on the disc. Ferko, as already discussed, Lauridsen and Gjeilo all use that particular European tradition as a starting point. The multi-divisii Sanctus of Gjeilo employs chant-like melodic phrases that build into rich and dense harmonic textures. Hawley’s Mosella, a fragment of a longer work by the fourth-century poet Ausonius, also has more than casual references to the earlier musical style.

Like Ferko, René Clausen is embedded in American academia and is one of a number of prominent composer-conductors. Based at Concordia College in Minnesota, a state that is home to generations of Lutherans with strong links to choral music, his sole contribution to this album perfectly captures the expansiveness of the Thomas Jones poem Dusk at Sea.

This disc (Beyond all Mortal Dreams) opens a whole new range of choral music that I had previously not explored. It’s a very easy introduction to recommend, as listeners will immediately be able to appreciate the distinctive emerging American choral tradition, and its references to English choral music (Fissinger’s Lux aeterna a very Holstian piece). It also serves as a fine introduction to the very finely polished Trinity Choir and through their performances provokes listeners to hear their other discs.

Morten Lauridsen: Nocturnes (I) – the Choir of Trinity College, Cambridge