Blog
Beauty in the Heart: The Chansonnier Cordiforme
by Maureen Buja November 8th, 2022

The title of the chansonnier, ‘cordiforme’, means ‘in the shape of a heart,’ and so the closed book has a heart shape. It is bound in red velvet. 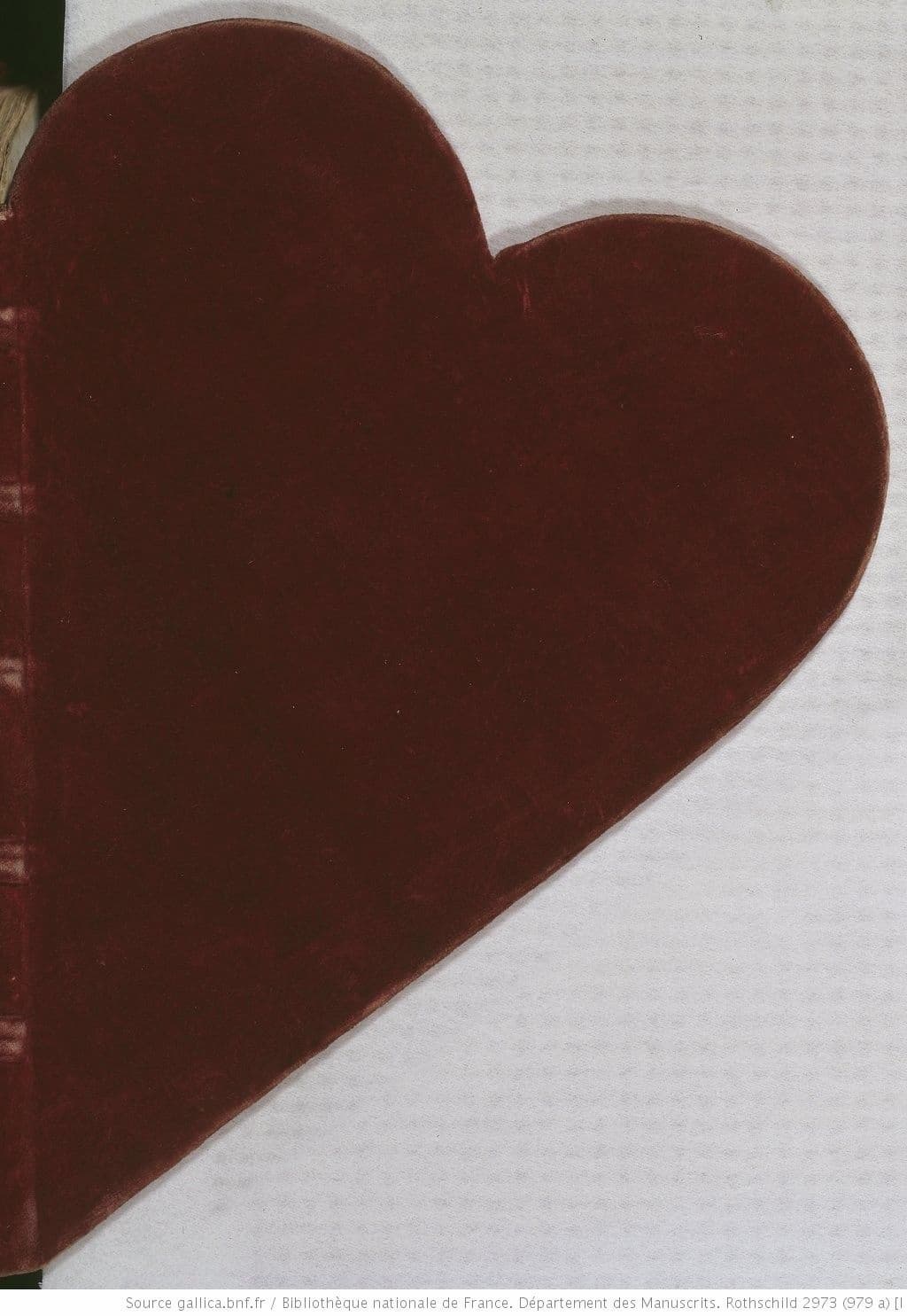 When the book is opened, it becomes two hearts. 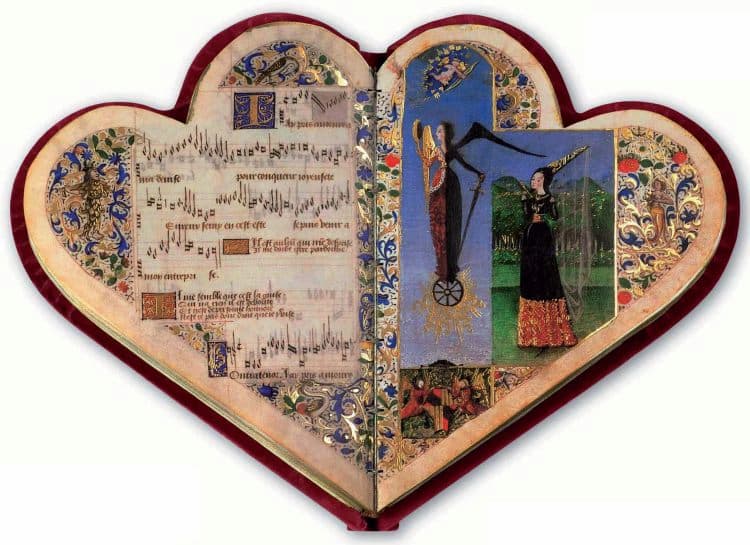 The book is filled with love songs and, in the image above, on the right side at the very top, Cupid is aiming his arrows of love at a woman while, to her left, Dame Fortune spins her wheel. Below the image is the coat of arms of the owner. 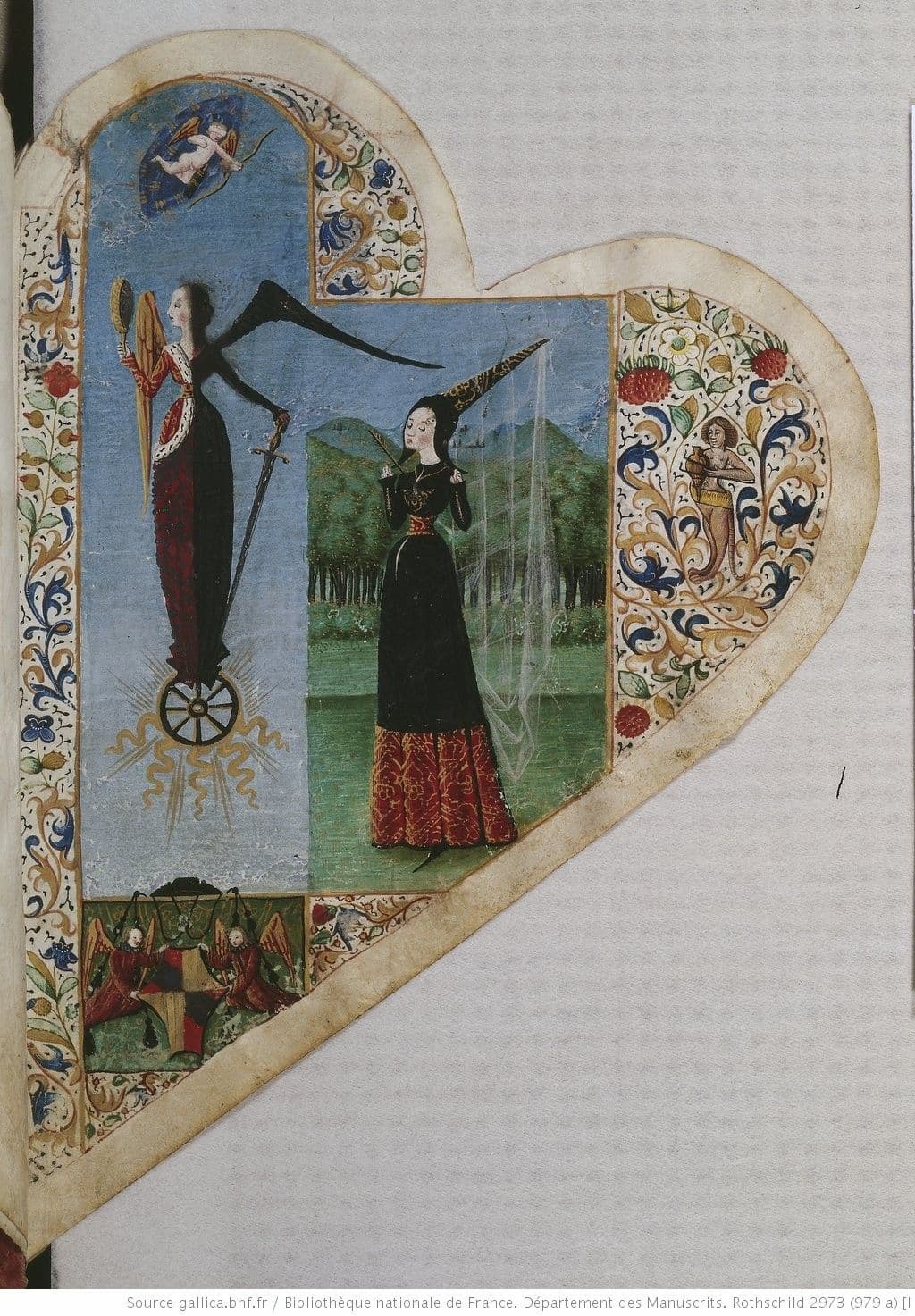 Cupid, the Lover, and Dame Fortune 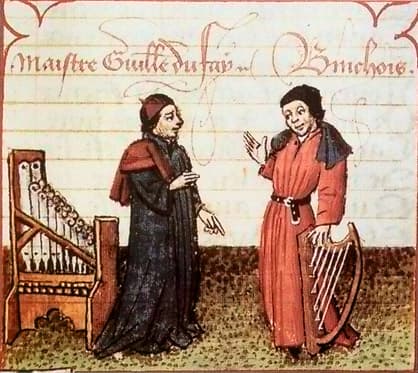 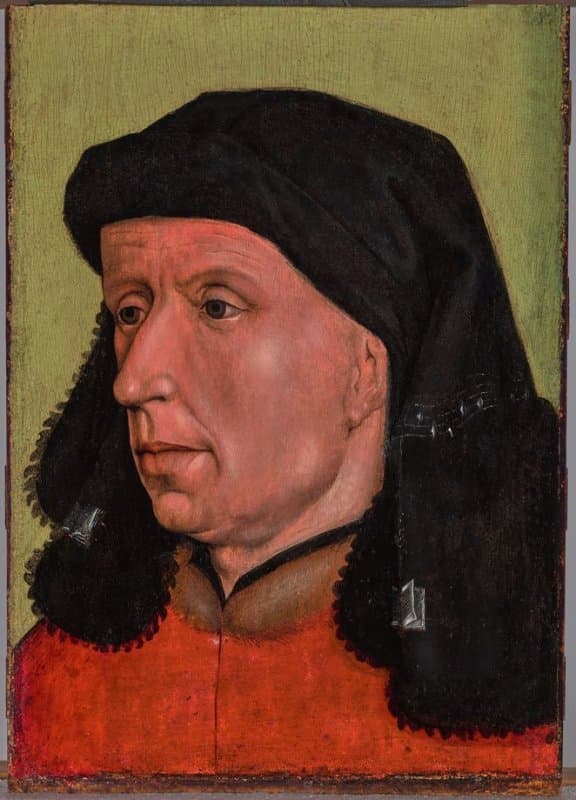 There are two full-page paintings – one is Cupid, Dame Fortune, and a woman, shown above, and the other is two lovers. The music is by the English composer John Bedyngham. 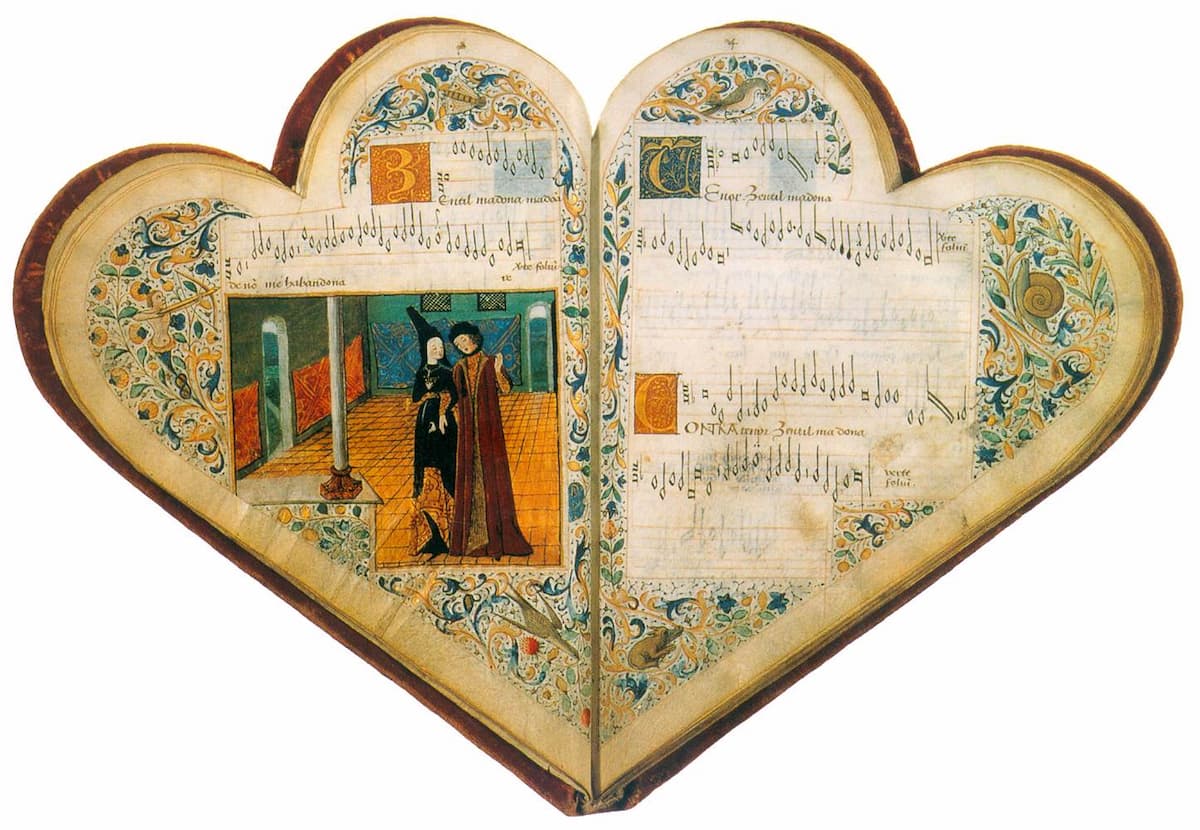 The music in the book includes some of the most famous of the time, such as O rosa bella. Long attributed to John Dunstable, it is now considered one of the works by John Bedyngham. The text was set by many following Bedyngham, including Dunstable, Gilles Joye (as the basis for a mass), and Ockeghem.


The Cordiforme was created in Italy, perhaps by the painters associated with the court of Savoy. The music seems to have been current in Rome in the mid-15th century and was probably collected by Jean de Montchenu when he was at the papal court around 1460. The manuscript was created between 1470 and 1475 for Montchenu.

The heart shape of the manuscript is very rare and only three other books in this style are known – a 15th-century Book of Hours probably created in Amiens, France, and two 16th-century collections of Italian poetry. One of those two manuscripts, see below, also contains music, here for the lira da braccio. As you can see below, though, these manuscripts are in the shapes of simple hearts, not the more evocative double heart used in the Cordiforme manuscript. When closed, these manuscripts look like a book with a curved edge, whereas the Cordiforme looks like a heart. 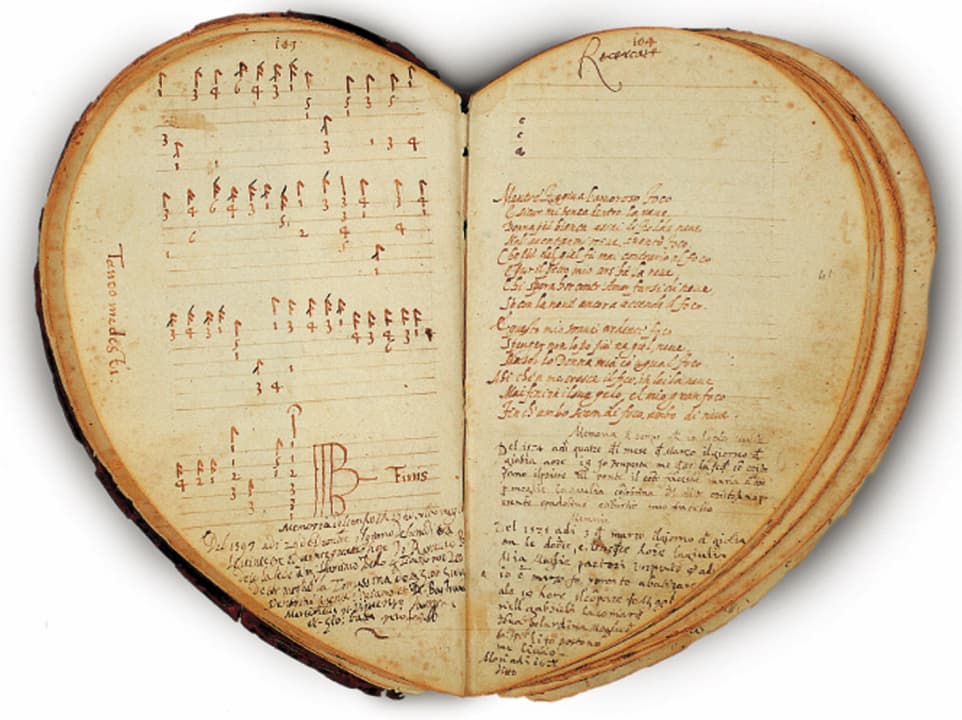 The layout of the music is not like a modern score but in separate parts. At the top right is the superius, below it the contratenor, and at the top left is the tenor, with the contratenor part continuing at the bottom. The full text of the song may or may not be included and in some cases, extra verses were added, such as here on fol. 13v. 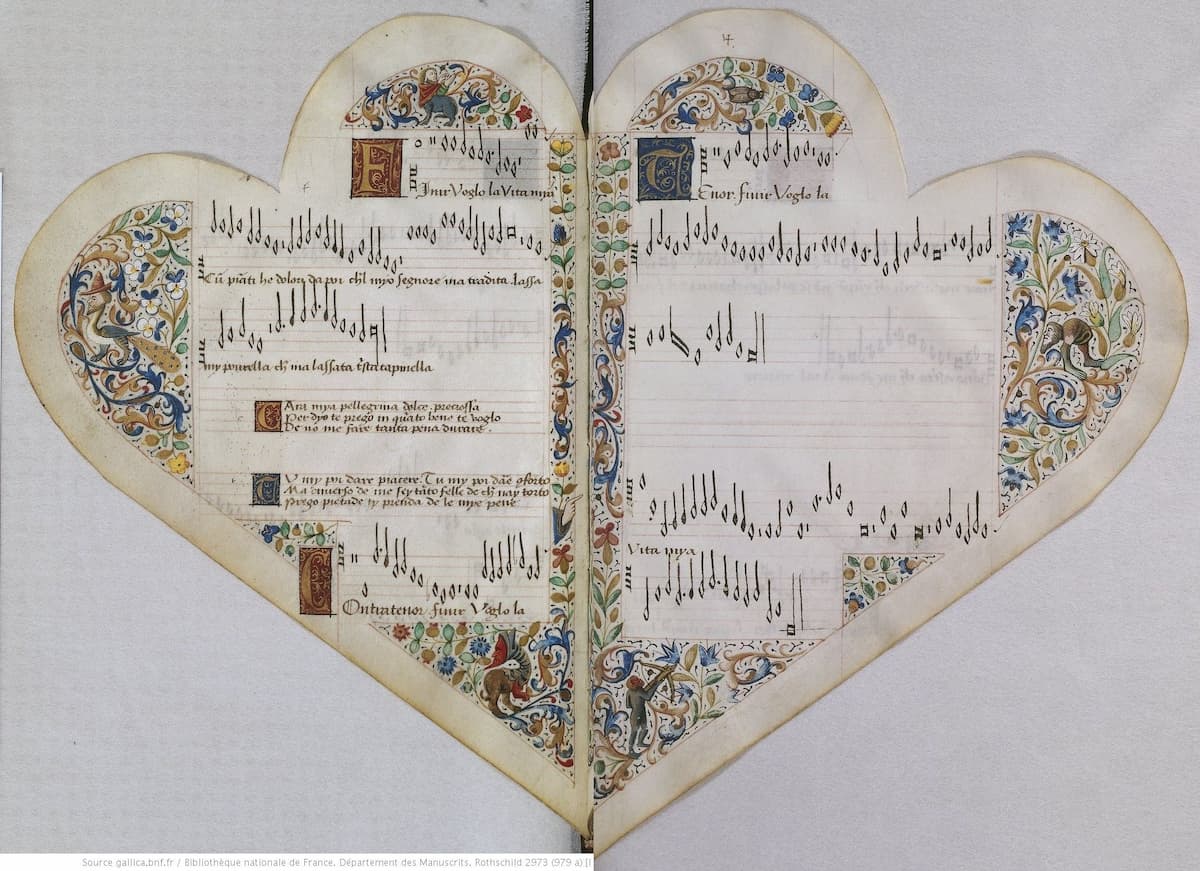 The decorations in the margins include fantastic beasts, such as the three man-beasts on the page above: on the left is an animal with a peacock tail, duck body, cat feet, swan’s neck, and a bearded man’s face. At the top is a 4-legged beast with a tail topped with a bearded man’s torso, arms, and head.

Other pages have illustrations of hunters, knights in armour mounted on horseback or standing, insects, peacocks, and other birds, cats, winged people, or man-beasts or man-birds playing instruments, such as the bagpipes or the pipe and tabor. There’s some humour in the illustrations as well, where a hunter in the bottom corner might be aiming at an animal across the page, or up in one of the two corners. A dragonfly is shown with dragon wings. 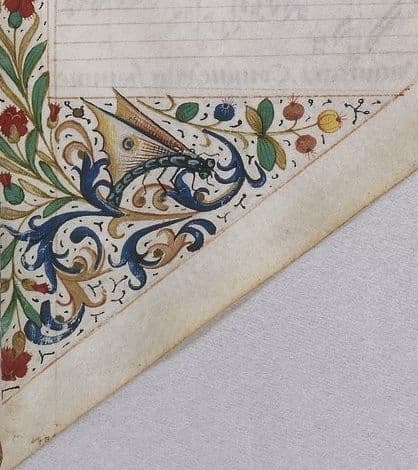 Despite this wealth of design, the manuscript isn’t complete. The last of the fantastic creatures appears on fol. 39r. Its facing page, 40v, only has flowers and leaves. The final pages are lined for the music but are empty. 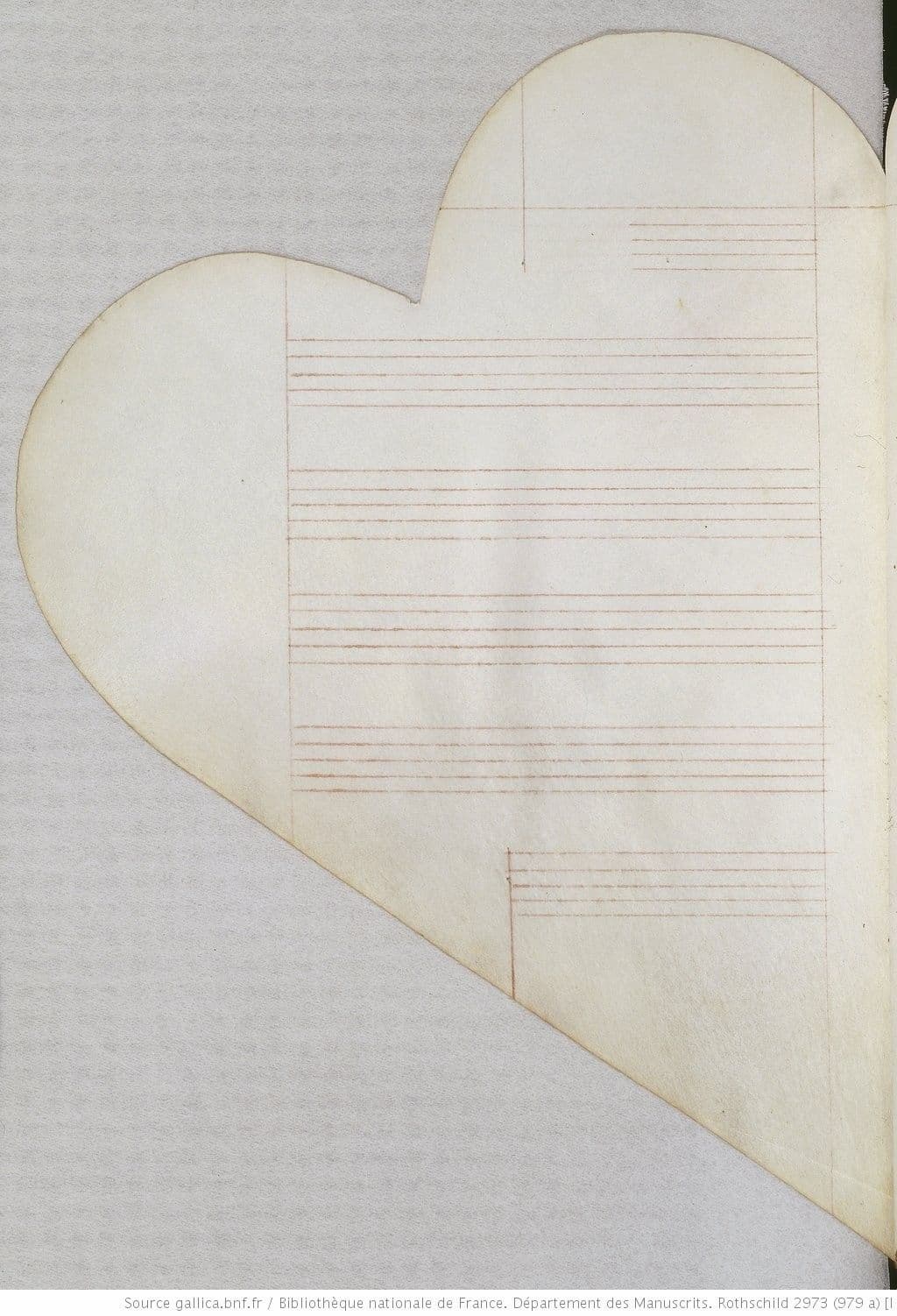 
This gives us an idea of how the book was created. First, design the pages: edges for decoration, center for music; next, add the music staves, then the music, the words, and the initials. Third, the floral decoration, and then, finally, the fantastic creatures and animals on top of the leaves and flowers, and the little dote to fill in the white space between the leaves and flowers.

You can look at the whole manuscript in colour.

The beauty of the book, the importance of the music (for at least 14 of the pieces, this is the only known source for the music), and the way a love volume was created still leaves us in awe today.