Composers Anecdotes
Bashing the Boo and Charming the Clouds
The musical world of Harry Partch
by Georg Predota March 8th, 2014 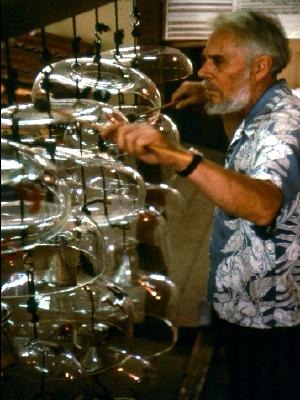 Have you ever heard of the musical instruments called Chromelodeon, Quadrangularis Reversum or Zymo-Xyl? If not, let me introduce you to Harry Partch (1901-1974), an American composer, music theorist and creator of unique musical instruments. The son of Presbyterian missionaries, who had twice served in China, young Harry grew up in Arizona. He heard songs in Spanish and in the language of the native Yaqui people, and mom sung to him in Mandarin. Mom also had him circumcised at the age of eight, which left the lad somewhat traumatized. Nevertheless, he learned to play several instruments at an early age, and started to compose at age 14. 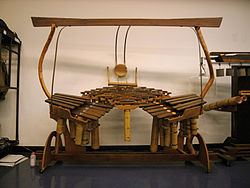 Once the family had moved to Los Angeles, Harry discovered Herman von Helmholtz’s book Sensations of Tone. Utterly fascinated by acoustic theory, he rejected the standard twelve-tone equal temperament of Western music. He also burned all his previous compositions, and looking for alternative ways of arranging scales. Experimentation with various tuning systems led Partch to work with scales that allow for smaller intervals than in the standard Western tuning. Partch divided the octave into an unbelievable 43 unequal tones, and described himself as a “philosophic music man seduced into carpentry.” I am sure you can easily understand the carpentry bit, as Partch needed to design, construct and build his own instruments in order to play his music. In his unique instrument collection we find adapted violas and guitars, a diamond marimba, the gourd tree and eucal blossom, the koto and the boo, cloud chamber bowls and the spoils of war.

The musical instruments of Harry Partch 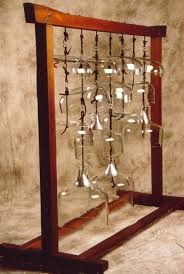 Greatly influenced by Ancient Greek theatre, Chinese opera, African theater, and Japanese Noh and kabuki, Partch attempted to create integral theatre works. Each performer would sing, dance, play instruments and engage in speaking parts in full view of the audience. This focus on the visual and bodily aspects of performance is amply demonstrated in The Bewitched of 1957. Musicians portray a losing women’s basketball team in the shower room, where they perform a wild dance for the nude god Hermes. As you might well imagine, in actual performance Partch had to substitute a clothed equivalent for his nude god. 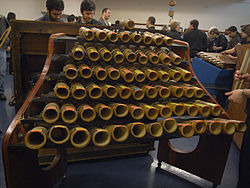 Partch’s personal papers, musical scores, films, tape and photographs documenting his life and work — including his diaries compiled during his years as a transient worker and hobo — are housed in the “Sousa Archives and Center for American Music” in Urbana, Illinois. If you would like to learn more about deciphering Partch’s musical notation or learn what actually made the man tick, it is still the place to start.