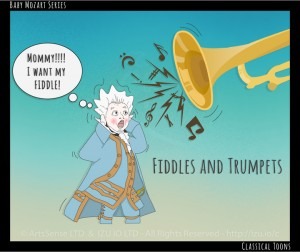 Wolfie Mozart loved his little violin and hated trumpets! At least that’s what Andreas Schachtner tells us in a series of letters written to Constanze after the composer’s death.

Schachtner became court trumpeter in Salzburg in 1754, and he was a regular visitor to the Mozart home. He reports that Wolfie, at the age of 6, received a little violin as a present. One day, Herr Wenzl, an accomplished violinist and beginner in composition, came for a visit and brought 6 trios with him. Leopold Mozart played the bass on his viola, Wenzl the first violin, and Schachtner the second violin. Wolfie insisted that he’d play the second violin, and when Leopold refused, Wolfie began to weep bitterly and stamped off with his little violin. Schachtner eventually suggested that Wolfie might be allowed to play with him, and Leopold said: “Play with Herr Schachtner, but so softly that we can’t hear you, or you will have to go.” So Wolfie played along, but soon took over Schachtner’s part! “I quietly put my violin down,” reports Schachtner, “and looked at Leopold; tears of wonder and comfort ran down his cheeks at this scene, and so he played all 6 trios.” When Wolfie had finished, and emboldened by the applause, he told us that he could play the first violin also. “For a joke we made the experiment, and we almost died of laughter when he played this part too, although with nothing but wrong and irregular positions, but in such a way that he never actually broke down.”

Schachtner also reports “until he was almost 9, Wolfie was terribly afraid of the trumpet when it was played alone, without other music. Merely to hold a trumpet in front of him was like aiming a loaded pistol at his heart. Papa wanted to cure him of this childish fear and once told me to blow my trumpet at him despite his reluctance, but my God! I should not have been persuaded to do it; Wolfgangerl scarcely heard the blaring sound, when he grew pale and began to collapse, and if I had continued, he would surely have had a fit.” And now you know why Mozart wrote 36 violin sonatas but not a single solo work for trumpet!