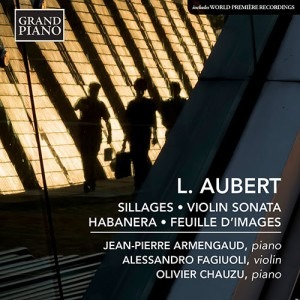 A pupil of Fauré, Louis Aubert moved in the same circles as Ravel, Debussy, Koechlin and others and was considered in his day to be one of the most original French composers. With its evocatively impressionistic images of seascapes, the night and Spain, Sillages is amongst the most significant French piano works of the early 20th century. The intensely expressive and impassioned Violin Sonata is Aubert’s only large-scale work in abstract Classical form and the distinctive Feuille d’images is a varied collection of educational pieces. The fiery Habanera, Aubert’s most frequently performed orchestral work, is heard in the composer’s own transcription for piano four hands.