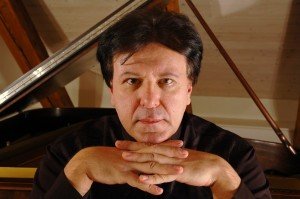 Andrei Gavrilov was a teenage superstar of the Soviet Union! In 1974, aged 18, he won the prestigious Tchaikovsky piano competition, and in the same year made his triumphant international debut at the Salzburg Festival. A protégé of the extraordinary Russian pianist Sviatoslav Richter, Gavrilov had recording deals with Deutsche Grammophone under Herbert von Karajan in his pocket, and the musical world was at his fingertips. “I was driving a Mercedes that was better than Brezhnev’s, and was becoming rich and independent,” he said. He also started to make critical remarks about the Soviet regime and as a result the good life and his international career came to a screeching halt only a couple of years later. Gavrilov failed to appear for rehearsal sessions with the Berlin Philharmonic for a recording of Rachmaninoff’s 2nd piano concerto. Gavrilov simply disappeared, and it was eventually discovered that the head of the KGB and later General Secretary of the Communist Party of the Soviet Union Yuri Andropov, with the approval of Leonid Brezhnev, had seized Gavrilov’s passport and the flight ticket and cut his telephone line. 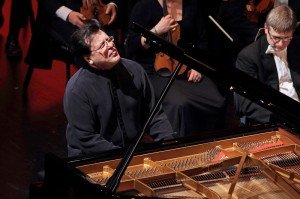 Gavrilov was placed under mandatory house arrest and at times committed to various psychiatric wards. For five years he was unable to travel outside the Soviet Union and his movements at home were severely restricted. “I was constantly watched and threatened,” he says. “At one time, one of the militia men guarding me showed me a paper signed by Andropov, which stated that authorities wouldn’t mind if a fatal accident would happen to me.” Finally, in 1985 Mikhail Gorbatchev granted him permission to leave the Soviet Union without having to file for political asylum. Gavrilov first settled in London and then in Germany and restarted his career at the Barbican and the Royal Festival Hall.

Following his Carnegie Hall debut in 1985, Gavrilov was celebrated “a major artist” by The New York Times, and when he won the International Accademia Musicale Chigiana Prize in 1989, he was proclaimed “the greatest pianist of the world.”

Gavrilov was seemingly back in the saddle with an exclusive contract with Deutsche Grammophon. However, out of the blue, Gavrilov stopped giving concerts and stopped all recording projects. One morning in 1993, he decided that he “couldn’t make the journey from Frankfurt to Brussels to play that evening. I suddenly realized I was not going to play this concert,” he says. “It came spontaneously. I called my agent in Belgium and said, ‘I’m not coming.’ He said, ‘Don’t be crazy, we are sold out and the Queen is attending.’ I couldn’t really even explain what was happening to me.” For almost 8 years, Gavrilov wrestled with a deep artistic crisis. “I wasn’t satisfied with myself. I was on top of my career, had everything, and was giving lots of concerts. In a material sense I was doing very well. But I knew if I was to continue in this way I would never be the artist I dreamed of being – free, original, idealistic, out of the so-called musical industry, which is a contradiction in terms. Music cannot be an industry; music is not like producing tractors.” In addition, his marriage was breaking up and he ended up losing his house, his money and apparently his son. “It was a death battle,” says Gavrilov. “I was desperate. I win or I die.”

For eight long years Gavrilov was searching to find the meaning behind the notes, and then he suddenly had a revelation. “I had an out-of-body experience on a plane somewhere over Nova Scotia. God opened my eyes and I saw at once the meaning of every note, it was like a lightning strike.” His search for new ideas and new approaches to music culminated in his 2001 comeback tour to Russia. He played 4 piano concertos in one evening, and since then, having lost none of his eccentricity, has been performing regularly. Sporting newly found confidence and greater maturity, Gavrilov now prefers to give life concerts since “recordings are unable to capture all the colors of my musical palette.” And in the last couple of years, he is also conducting all concertos from the piano himself. It remains to be seen how Gavrilov will fare on the ultra-competitive and over-hyped musical stage of today. And his message that teachers and young pianists are “neglecting artistic development, musical analysis, cultural understanding and produce nothing but perfect public toilet sounds” will certainly not make him popular with the younger generation. Be that as it may, Andrei Gavrilov was, and still is, one of the greatest pianists of the 20th century.