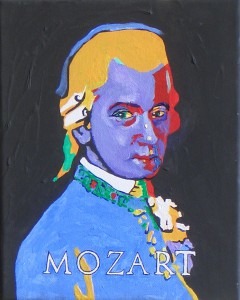 When it comes to transcriptions and arrangements, the music of Johann Sebastian Bach has beautifully served the aesthetic and practical musical needs of subsequent generations. As we have heard in a number of episodes, Bach’s music was variously aligned with a huge variety of musical styles and instrumental combinations, and is also providing inspiration to scores of younger composers. Bach’s music has easily remained relevant in the modern world, but it is Wolfgang Amadeus Mozart who has become the most admired composer in the history of Western music. Hailed as the archetypal musical genius, Mozart wrote strikingly original music that appeals to both the most popular and the most sophisticated musical awareness within us. He was able to render in music the subtlest shadings of human emotions—love, jealousy, duty, and wit—with a naturalness and human sympathy that has never been equaled. No wonder that transcriptions and arrangements of his music are as plentiful as they are ingenious and beautiful. Let’s get started!

Wolfgang Amadeus Mozart: Symphony No. 39, K. 543, arr. Johann Nepomuk Hummel
Johann Nepomuk Hummel (1778–1837) was probably the most talented Mozart student. In 1823 and 1824 Hummel received commissions from J. R. Schultz for arranging the most famous works of his celebrated teacher. Hummel started his task with a number of Mozart symphonies arranged for flute, violin, cello and piano, and the reviewer of the London editions wrote, “Hummel never bestowed upon any arrangement so much care as upon these symphonies, and he says he did so out of a tribute of respect to his immortal master.” In fact, Hummel’s respect for Mozart’s compositions prevented him from varying a single harmony. These arrangements proofed so popular that Hummel was subsequently asked to provide arrangements of seven Mozart piano concertos as well.

Wolfgang Amadeus Mozart: Die Magic Flute, K. 620, arr. Alexander Zemlinsky (Act 1)
For the Viennese publisher Joseph Weinberger, arrangements of operatic scores for home use proofed to be a successful strategy for his newly found business. Having to compete with the German publishers centered in Leipzig, Weinberger engaged Alexander Zemlinsky to fashion four-hand piano transcriptions of a number of famous operas, among them Beethoven’s Fidelio, Lortzing’s Zar und Zimmermann, and Mozart’s Magic Flute. Zemlinsky’s arrangement takes us back to the roots of the work. There are no sets or costumes, no voices, no flutes, no bird imitations, no bells and no whistles. It is just music, glorious music!

Johannes Brahms: Cadenza for W.A. Mozart Piano Concerto in D minor, K. 466, WoO13
Initially, Johannes Brahms introduced himself to the musical world as a pianist. As early as 1853, he went on an extended concert tour with the Hungarian violinist Eduard Reményi, and struck up friendships with Joseph Joachim and Clara and Robert Schumann. For his own concertizing activities, Brahms started to fashion a number of cadenzas for the keyboard concertos by Bach, Beethoven and Mozart. For a performance in Hamburg for the Mozart centenary celebration in 1856, Brahms played for the first time an elaborate cadenza for Mozart’s Concerto in D minor, K. 466. Brahms gave the manuscript to Clara Schuman as a present, who played the “Brahms” cadenza herself on 1 January 1857. This cadenza was first published only in 1927. I trust these tantalizing arrangement have peaked your curiosity and whet your appetite! There is much more to in store over the coming weeks.