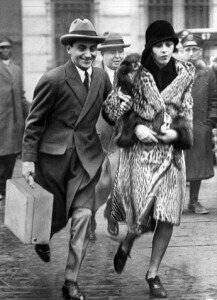 We all know the sad story of Friedrich Wieck taking Robert Schumann to court in order to prevent the “old alcoholic and womanizer” from marrying his daughter Clara. The heated court battle raged for almost a year, but once Schumann was able to prove that he was able to financially support Clara, the court reluctantly granted his petition. Clara and Robert got married in a real hurry, and Mr. Wieck really never spoke to his daughter or son-in-law again. Every father only wants the best husband for his daughter, but some gentlemen do rather go to extremes! Once New York socialite and heiress Ellin Mackay cast her eye on the famous songwriter Irving Berlin during a dinner party, nothing could ever be the same. Their whirlwind romance caused a media feeding frenzy on both coasts and extended as far as Europe, keeping the paparazzi in flashbulbs for over a year. Illinois father, Clarence, head of the Postal Telegraph Cable Company and heir to one of the largest silver mines in the history of mining, was clearly not amused. For one, Irving was fifteen years Ellin’s senior and already a widower, as his first wife had died of typhoid fever contracted during their honeymoon in Havana. For Clarence, Berlin worked in the shady world of show business, and above all, he was Jewish while his daughter was a proud and devout Catholic.

Clarence Mackay did not take the couple to court, but he sent his daughter to Europe to find a more suitable husband. His plan, however, misfired as the long-distance romance continued unabated. Since Irving was unable to discover the exact whereabouts of his beloved, he communicated with her via radio. Aided by an overenthusiastic press—which found the story of the poor immigrant and the young heiress truly irresistible—Berlin composed his songs “Remember” and “Always” and had them broadcast across the Atlantic. The rumor mill was spinning at full speed, and their supposed engagement was proudly reported in newspapers nationwide, with “Broadway shows featuring skits of the lovelorn songwriter.” When news of an imminent wedding surfaced, Clarence Mackay’s only comment was “over my dead body.” Once Ellin returned to the United States, the couple was besieged by hordes of gossip columnists, and soon decided to elope. They got married in a simple and private civil ceremony at New York’s City Hall on 4 January 1926. Rather than making good on his promise of dying, Clarence disinherited his daughter instead. It is estimated that disobeying her father cost Ellin roughly nine million dollars!

Irvin and Ellin, meanwhile, put aside their differences in culture, background and age to “become one of the great love and success stories of the twentieth century.” Both blossomed, with Irvin enjoying unparalleled success as a songwriter, and Ellin becoming a distinguished writer. In all, she published three novels, a biography of her grandmother Louise Mackay, and various articles and short stories for The New Yorker. Their daughter Mary Ellin Barrett also became a writer, publishing a number of well-received books. As with all relationships, the couple endured a number of severe hardships and tragedies. Their only son, Irving Jr. was born on 1 December 1928, and found dead in his crib on Christmas Day. News of the tragedy softened Clarence’s heart, and he visited the grieving couple, eventually resulting in complete reconciliation. Clarence Mackay died in 1938, and his funeral service at St. Patrick’s Cathedral featured a performance by the New York Philharmonic. Irving and Ellin were inseparable and married for sixty-two years! Ellin died in 1988, and Irving followed her into the grave the following year, aged one hundred and one. Love it seems can overcome all obstacles, and I can’t honestly think of a more appropriate Christmas message!