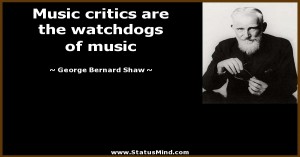 What do you do when you read a concert review that you disagree with? Do you bristle with ripe indignation because the reviewer did not concur with your view of the concert and then fire off some grumpy comments in response, informing the reviewer that they clearly need their hearing tested? (I’ve had a couple of comments like this in response to my reviews – it does happen!) Or do you read the review in a considered way, accept that not everyone is going to agree with you, and be glad that it’s possible for people to express differing (sometimes wildly) opinions?

Nowadays, we live in a world where everyone is a critic: whether someone has seen one show or several thousand, they have an opinion about them and the means to broadcast them. But it is palpably false to say that all opinions are equal. Some people stand above the noise and clamour of the internet simply by virtue of the credibility their opinions have earned.

The internet has made us all “reviewers” to a greater or lesser extent: from “likes” on Facebook or Instagram to product reviews on Amazon to long articles on personal blogs and mainstream news sites, the medium allows us to express our thoughts and opinions like never before.

On one hand this can be wonderful: it adds variety to discussions and fuels debate; but the internet also seems to have created a place where every entrenched or polarised view is expressed without the nuance that comes from more considered or face-to-face interactions. People can be far more brutally frank or insensitive in the anonymity of the web than they would ever be to someone’s face. Sometimes when I read comments on concert reviews I see quite of lot of responses which suggest, none too subtly, that “if you don’t agree with me, you are wrong!”. Twitter is, sadly, one of the worst places for this – the brevity of the medium (140 characters) seems to encourage polarity and confrontation rather than nuanced discussion. The commentator might counter that “everyone is entitled to their own opinion” but a sense of entitlement is not enough: as far as I’m concerned, you’re only entitled to an opinion if it’s an informed opinion….

The problem with “I’m entitled to my opinion” is that, all too often, it’s used to shelter beliefs that should have been abandoned. It becomes shorthand for “I can say or think whatever I like” – and by extension, continuing to argue is somehow disrespectful. And this attitude feeds, I suggest, into the false equivalence between experts and non-experts that is an increasingly pernicious feature of our public discourse.

An example of this is the reaction online to a review in The Washington Post of a concert by pianist Sir Andras Schiff. A flurry of comments online in response to the review reveals an uncomfortable amount of entrenched or binary views rather than accepting the review as an informed, coherent write up offering one person’s opinion of the concert. Of course it doesn’t help that it’s a review of an artist whose statue borders on sacred and who is regarded by many as a high priest of the piano.

Andras Schiff/J S Bach – Italian Concerto
Many concert-goers, and even some critics and reviewers, feel a very special, personal connection to performers like Andras Schiff, Martha Argerich, Maurizio Pollini, Yuja Wang, and many others. We seek out our favourite artists, enjoying the special magic they create for us personally in their performances and recordings (and never forget that music is a highly personal, subjective experience). Social media platforms like Twitter allow us to contact and interact with many of these artists directly, giving us an even greater personal connection with them. We place these people on pedestals for our personal worship and we’ll argue vociferously with those who do not share our reverence and admiration. And that’s fine – just so long as we’re able to accept that others have different tastes and opinions.

But it troubles me when I come across comments which accuse the reviewer of being “wrong” or worse “stupid” simply for not appreciating a concert in the same way as the reader did. Reviews offer a record of an event and express one person’s opinion: it is neither right nor wrong, merely an opinion. In a well-written, coherent review, the reviewer should be able to write a record of the concert based on a degree of knowledge, to describe the music and performance, and explain why he/she liked or disliked aspects of the concert, in language which is intelligent, considered and fair, rather than just making bald unsubstantiated statements or, worse, hiding their lack of an opinion or knowledge in purple prose or jargon-ridden, high-falutin language.

The purpose of a review is to provide a record of what happened at a performance and to evaluate what happened, whether the reviewer heard greatness, horror, or mediocrity. Evaluation is what sets a reviewer or critic apart; a reviewer theoretically has enough knowledge and experience to support the opinions they form about a performance.

Some years ago, an acquaintance, who knows about my reviewing and blogging activities, wrote to inform me that he thought a certain international concert pianist, one whom I much admire and have reviewed several times in concert, was an example of “the Emperor’s new clothes“. There was no further explanation as to why this person held this view of the pianist in question. Now, if asked, I could give at least three coherent, considered reasons why I admire this particular pianist, and I would expect – nay, welcome – someone who disagrees with me to be able to argue otherwise in a similarly coherent, substantiated way.

All of this reminds me of that quote attributed to Voltaire: “I disapprove of what you say, but I will defend to the death your right to say it.” In the curious and very noisy echo-chamber of the internet, it serves as an important reminder that we should take note of the opinions of others, to respect or accept them, to respond in a more nuanced way, and to agree to disagree.