This article has been written in reaction to hearing “I don’t like this [enter instrument, genre, artist etc.]” too often. As a composer, diversity in music is equal to the painter’s, who constantly seeks for new colours, or the chef’s curiosity for new flavours. Of course there are musical tastes, and one should not necessarily repeatedly seek for discoveries the same way creators do in their search for inspiration. However, lack of taste is very often due to the absence of knowledge and disposition towards curiosity. I believe artists know their likes and dislikes and why it is so.

Consequently, the following is a little guide or recipe for the non-musician to discovering new music. It follows the rule of five—five listens to a piece of music in order to discover it, analyse it, understand it and appreciate it—or not. For the purpose of the exercise, we shall use Mozart’s Andante from his Concerto for Piano, K. 467, not only for its familiarity and having been featured in many places, but also for a very clear orchestration and usage of colour which will make the exercise easier.

Note: this exercise has been practiced in primary school, with much success. 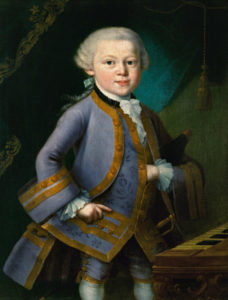 I. The Joy of the Unknown — Discovering and Appreciating the Form

I often compare this feeling to hearing someone speak an unknown language—without understanding it but appreciating the beauty of it. Here, in the case of K. 467 it is of course the melody as well as the lightness of the accompaniment. The discussion between the instrument is here obvious. Then, there is the melody played by the piano, which brings a feeling of intimacy between the instrument and the listener. The strings are very typical of Mozart’s writing; they come and go and support the soloist—here the piano—both with vivacity and delicacy. The middle section gives space for the piano, however it is very sparse.

II. The Context — Understanding the Origin of the Piece

Mozart was twenty-nine when we wrote his 21st Concerto for Piano, K. 467. He completed it just a month after his previous concerto, K. 466. The concerto is scored for solo piano, flute, two oboes, two bassoons, two horns in C, two trumpets in C, timpani and strings, and has—following the tradition—three movements. The middle one, the Andante—a tempo marking, which is Italian for “walking”—is scored in F, the subdominant key to the two other movements, another traditional choice for a concerto. Here, Mozart is following the tradition and the models of the time, which explains how he has managed to complete it so quickly. Effectively, a myth breaker to the genius of Mozart—often unknown to the non-musician—is the fact that most of his work follows the same musical recipe and blueprint—the tonic/dominant relationship, the sonata form etc.—which allowed Mozart to compose music very quickly. An interesting game for the enlightened amateur is to go through the composer’s repertoire and identify the models and similar forms. Without taking away the composer’s talent, it explains a little more his capacity at writing at lightning speed. 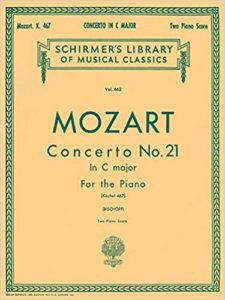 In Mozart’s Andante the main melody is first held by the strings, while the winds provide the contrasting support, and then second contrasting melody. There is additionally a constant support from a section of the strings, which provide the ternary-based rhythm and the character of the piece. When the piano finally comes in, it is first by reiterating the main melody, and then letting itself go to its soloist role, with a continuous but discreet support from both the strings and the winds. There is a persistent exchange between the orchestra and the soloist, quoting each other and replying in a call and response manner. The instrumentation is very simple and it is quite easy to follow each of the actors from beginning to end. Mozart’s capability at writing simple arrangements is another reason for his understanding by many.

IV. Paying Even More Attention — What Is Being Said?

The main melody, exchanged by the strings and the piano is actually very simple and easy to analyse—even without much musical knowledge. It is structured in two parts, each of them broken down in smaller parts. The first part carries the least amount of tension; it climbs up, three steps where it rests a little and lightly collapses. A second try follows, with a similar form but more floating. Then the second part sprays tension and navigates through waves of stresses. When the piano comes in to repeat it, it sounds like it is whispering to the ear. The piano then develops on it, and very much like the bird who sings, evolves through spontaneous phases. When it finally resolves and concludes, it is joined by the orchestra, providing the introduction for another waiting phase like a boat that has to meander to return to the shore. Eventually the piano reiterates the melody, this time supported by the orchestra.

It is wonderful how Mozart music is simple and yet fascinating. The exploration of the music, with the addition of its understanding coupled with the curiosity of its origin breaks the barrier of classical music as being difficult or out of reach, and allows the listener to grasp its full content very quickly. It is a very superficial exploration, and one would want to dig in deeper, especially the musically inclined. However, this method teaches the listener to listen, rather than simply hear. The more practice, the easier it gets, the more interesting it becomes. One starts to find similar approaches and maps between composers, and periods and genres. And the curiosity keeps growing and growing…

Supplement: Popular music has a goal, which is the one of pleasing people’s ears—in order to sell. This is why it follows a similar format/recipe for each song. The listener’s ears are pleased from the start because of the familiarity. The feeling of having heard the music before. While it might be pleasing, there is very little challenge for the ear and the mind of the listener; which is why popular music is often depicted as “simple” and classical and/or jazz as “intellectual”.