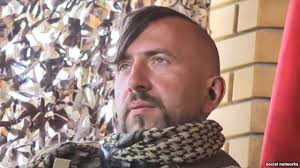 Opera singers die on stage almost every night! However, it’s somewhat rare for them to actually perish in real military engagements. But that’s exactly what happened to Ukrainian bass-baritone Vassyl Slipak on 29 June 2016. After singing at the Paris Opera for almost 20 years, Slipak joined the fight against pro-Russian insurgents as a member of the 7th Battalion of the Volunteer Ukrainian Corps of the Right Sector. His colleagues at the Opera tried to persuade him to reconsider, but Slipak was determined to fight even if it was between singing contracts.

“He decided to go to the frontlines because he needed to feel useful and defend his country,” reports a friend, “it’s about culture, it’s not really about politics. It’s all about the freedom of his country.” Slipak was born in Lviv, and considered a musical prodigy. He sang in the Dudaryk boys’ choir and graduated from the Lysenko National Music Academy. Starting in the late 1990s, he moved to France and was invited to join the Paris Opera. He also won the prize for best male performer at an Opera Competition and Festival in Szeged, Hungary. But it was his rendition of Gounod’s Faust that propelled him to international stardom. Slipak was always outspoken in his efforts to bring attention to Ukraine, and he even started an association to help orphans of the Donbass war. As he wanted to do more for his cause, he personally joined the frontlines. On the battlefield, Slipak exhibited the traditional Kozak hairstyle, and was known as “Meph,” in reference to his favorite role of Mephistopholes in Faust. He planned to continue his singing career in Paris, but was cruelly cut down by a sniper’s bullet in eastern Ukraine. Slipak was buried in his hometown, and memorial series were held in Paris and Rome.