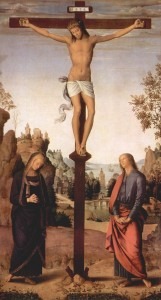 The Sorrows of Mary became the theme for the Stabat Mater, or, to give it its full name, Stabat Mater Dolorosa, or The Sorrowful Mother Stood. The sorrowful mother, Mary, standing at the foot of the cross upon which her son is crucified, reflects upon the torments visited upon him. The poem asks the viewer to share her pain and, in doing so, lessen her grief by taking it upon ourselves.

The poem was written in the 13th century and quickly became a source for music inspiration. The Vatican composer Giovanni Pierluigi da Palestrina set it in mid-sixteenth century, shortly before it was banned from church services. His setting emphasizes the text, with the music flowing around clear harmonies.

Palestrina: Stabat Mater (Lumen Valo)
The text for the Stabata Mater, in the Catholic Church, was used as a ‘sequence,’ i.e., a hymn sung during the celebration of the Eucharist in the Mass. By the mid-sixteenth century, there were so many of these that in a giant overhaul of the liturgy in 1570, hundreds were removed and only 4 remained. The Stabat Mater was one of the discarded sequences but it was reinstated in 1727 by Pope Benedict XIII. This explains the compositional hole we see – after Palestrina and Lassus’ setting, it’s not until the 18th century that the setting continue again. There are Stabat Mater settings from Haydn, Pergolesi, Dvořák, and up through Szymanowski and Arvo Pärt.

It is Pergolesi’s 1749 Stabat Mater setting that many people know. It is set almost like a little oratorio, with duets and arias for soprano and alto, all accompanied by a string orchestra and basso continuo. As you listen to the opening, your mind immediately flashes forward to a similar setting that appears in Mozart’s Requiem of 50 years later.

Pergolesi: Stabat Mater, Duet: Stabat Mater dolorosa (I Solisti Veneti; Claudio Scimone, cond.)
Moving forward to the 20th century, we encounter Francis Poulenc’s Stabat Mater setting from 1950. More so than in the earlier settings we’ve heard, Poulenc immediately takes us to the dark side of the poetry. It’s a big work for soprano solo, choir and full orchestra, and he skillfully uses the colors of the orchestral to place us beside the sorrowing mother.

Poulence: Stabat Mater, I. Stabat Mater dolorosa (Île de France Vittoria Regional Choir; Orchestre de la Cité; Michel Piquemal, cond.)
The Estonian composer Arvo Pärt has brought sacred music back into popularity in many ways. His setting of the Stabat Mater seems to take us away from the big orchestral settings of Pergolesi and Poulenc and returns us to a very private place of sorrow. The long instrumental lines and textless voices seem to hold us in a place of meditation.

Pärt: Stabat mater (RIAS Chamber Chorus; Berlin Radio Symphony Orchestra; Kristjan Järvi, cond.)
The variety of settings shows us how each composer looks at the text differently. While Palestrina wants us to hear the details of the text, Pärt wants us to be able to reflect on the very meaning of the text.