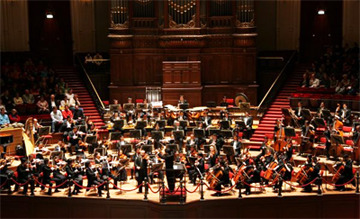 Staatskapelle Dresden once again came to China last week. The tour was led by the young Nikolaj Znaider, who is not exactly renowned for his violin or his conducting. The concerts were fair but far from brilliant, according to the critics. And – whether because Znaider was not available or because the orchestra realised they would need a bigger conductor to match their reputation, we don’t know – they invited Lorin Maazel to fly to China especially for the last concert at the China National Museum for its grand opening day. There were of course many backstage stories about fighting between venues and the agency and between different sponsors, but that is normal for concerts – ugly scenes in the back and a good show in the front. After all, the classical music business is the same as any other business. Well, I got a little bit carried away, but gossiping is an exciting part of life.


What I really wanted to talk about is actually another matter entirely. It is apparent that big, famous western orchestras are coming more frequently to China these days. It is, in a way, not a bad thing. It demonstrates our economic strength and international status, and in a sense benefits our people by developing and promoting music and the arts – if we could only afford those tickets.

Still, the country is welcoming more and more international artists and groups, and more and more people are becoming interested, expressing their views and exchanging opinions about the performances. These are all helping in the development of the industry.

The Berlin Phil, Czech Phil and Tonhalle Orchestra will all be coming this year, and next year will be the Concertgebouw, London Symphony, Bavarian Radio, Philharmonia and many more. Apart from the Tonhalle, they are all returning for a revisit.

While cheering for the market boom on one hand, I just can’t help thinking about our own orchestras on the other. It’s not as if there are no opportunities for them to perform. The government still provides funding (though not huge), venues still offer dates, and music fans are still happy to attend the concerts for the low ticket prices offered, as long as the performances are exciting.

But do our orchestras give themselves a chance when there are good opportunities to be had? One national orchestra was asked by a venue in Beijing to play for their most highlighted event of the year. The promoter paid big to invite a renowned international conductor and famous soloists to work with them. The orchestra hadn’t even needed to use their own funding for a chance to work with top western artists. For a modest orchestra, I can’t imagine any better opportunity. However, during the three days of rehearsals, not a single day passed without one member or another being late or missing altogether. What’s more, the members would walk out for a cigarette in the middle of rehearsal. Even the rehearsal period was cut short to two days because the orchestra had received another offer for a commercial concert on the third day. Without consideration for the conductor’s schedule, the orchestra even tried to reschedule the final dressed rehearsal to a slot just before the concert, so they wouldn’t have to hang around. That way, they could do the rehearsal and concert together, then return home.

One of the orchestra members was seen bringing his score home, and when asked why by the other members, he replied that he was going to study and practice. They all laughed at him.

The conductor was shocked by this experience. He nearly returned to his home country. He kept asking, “What for? Why am I even here? Why do you need me here?” If a national orchestra has an attitude like this, what more can you expect from this country?

People who heard or saw the whole thing felt ashamed. The reputation of the Chinese certainly took a serious blow. People who knew the orchestra would shake their heads, saying that it had not improved in its 50-year history, so how could we expect it to improve within three days?

But the saddest thing is that the orchestra’s members and management team saw it as very normal – no harm done. When the promoter tried to persuade them to be a little more responsible, they simply said that they had done more than 25 commercial concerts this month in all sorts of places so their members were just too tired. When they explained this, they spoke proudly about the number of concerts they had done.

Any Chinese in his right mind would feel rage when faced with this kind of attitude. But the worst thing is that they are our fellow countrymen, and they just don’t care. We want to be proud of their music. We hope to see more and more Chinese orchestras become big names in our halls, or even on the international stage. We hope that our musicians will be respected and sought after all over the world. But all we see is talented people wasting their lives and giving up hope.

If our musicians want to throw their weight about or make a quick buck from the job without understanding their own performances or caring to improve, they might just end up playing for themselves with no one else to listen, and our music industry may well suffer a slow murder.