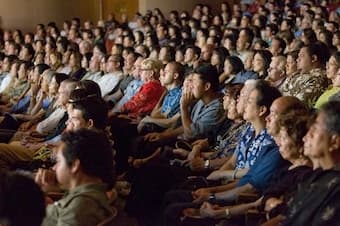 Ill-timed coughs, un-silenced cellphones, rustling sweet wrappers… the frustration felt by some musicians towards their audiences at concerts is unfortunately all too well documented. You’d almost think some musicians prefer performing to an empty room. But, come to think of it, what is the difference between a rehearsal and a concert? Is an empty room a suitable sacrifice for the guarantee of no unexpected audience participation?

It’s easy to focus on the more annoying things that can happen when performing to other people, things that distract us or bring us out of the moment. However, sharing a room with an audience brings a special energy; performing to other people totally changes the atmosphere in the room and is well worth any spontaneous interruptions from the auditorium. (And it’s important to remember no-one does this maliciously. No-one sets out to a concert with the intention of having an unfortunate acid reflux episode in a delicate moment of the adagio. Well, hopefully not.)

The presence of an audience generates excitement, spontaneity, risk – things you can only achieve so much of alone in the rehearsal room. One of the most exciting things that can happen in a concert is for things to go in a different direction than they may have done previously.

I’m only speaking in musical terms, of course. One band leader took ‘going in a different direction’ a bit too much to heart and exited the stage in an entirely unexpected direction: by falling off the front of it. (Don’t worry folks, they quickly leap back up and are still smiling afterwards… I think…)

When everyone is attuned to the slightest change in tempo, expression or dynamic in the music, really exciting things can happen. The audience is definitely a part of this, and the collective experience of live music is unique and special, from the moment you walk out on stage right to the applause at the end. 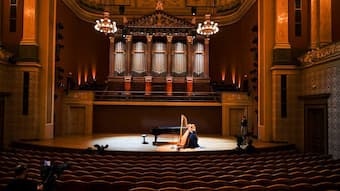 Harpist Jana Boušková performs at a benefit concert ‘without an audience’
given by Czech Philharmonic. © Petr Kadlec / Classic FM

The power of applause should never be underestimated. It’s the moment where the audience and performer(s) continue their connection, giving each party the chance to show their appreciation to the other. One of the strangest things about a rehearsal is that you can charge through to the end of a triumphant overture or sing your heart out in the joyful finale of a concerto only to be greeted with silence after the final chord. The music just evaporates, and you’re left with an empty room.

This has only been exacerbated during the last year, where live-streamed concerts have (unsurprisingly) exploded in popularity. The strange atmosphere of performing to an empty room is no longer just the preserve of the rehearsal – we now have to bring that intense energy of a performance to a room where the audience consists of perhaps just a sound engineer, a couple of camera operators and a tangle of cables. 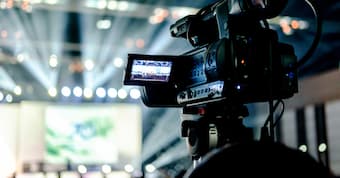 Many of my colleagues actually say they get more nervous when there isn’t an audience. This might come as a surprise, but part of music is sharing it with others, after all. We don’t rehearse just to be pleased with ourselves that we can play something. Performing to others gives us a focal point for our nerves and adrenaline, and when that focal point is taken away that energy has to go somewhere. I’ve definitely felt this at times, where the absence of an audience has turned my nerves inwards rather than being able to focus on something external.

The past year has reaffirmed how, for me, audiences are such a huge part of the equation. Performance experience is just that: having opportunities to be in front of people time and time again, and learning to harness that relationship, to go in unexpected directions and to learn new things from those detours. I’m sure we will all get used to live-streaming more, and it’ll probably remain part of the musical landscape for some time to come, but for me, nothing beats the electric energy of a live event. It gives our rehearsals purpose, and helps us to up our game in the heat of the moment. I’m even starting to miss the coughing in the quiet bits – I must be getting desperate…