In Tune Society
The Reason for the Crowd
by Maureen Buja December 4th, 2014 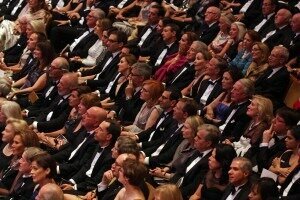 Why do you attend concerts? Is it for the performer or the work being performed, or, is it because it’s the place you need to be to see and be seen?

There’s nothing sadder than attending a fabulous concert and finding empty seats in the audience. As an audience member you want to know how this happened – did not enough people know about the concert? Was there a conflicting concert? Or did the potential audience just not know enough about the performer or the repertoire to buy their tickets?

Any of these factors can come into play, of course, on any given night. But, what’s almost worst is when an audience comes for the value of the venue: it’s the place to be seen and, therefore, you need to be there. The concert that’s going on is then valueless, but as long as you’ve made your appearance in society, then perhaps the concert was never the point.

We understand the value of culture and how much of it has to come from the intrinsic value of the music and of the performer. When, however, it assumes a falsely heightened value, there may be many people who lose out. Think of when your favorite restaurant become flavor of the month, driving out the regular patrons and attracting demanding short-term patrons who then flit onto to the next hot thing, leaving the restaurant without any patrons at all.

Part of the problem with this is the increasing amount of marketing based on brands. I don’t go to the Philharmonic to hear Brahms, I’m told that I’m there to hear “Famous Conductor’s Brahms” (you can put in any conductor’s or soloist’s name you wish). The marketing department of the orchestra is seeking to gain its audience based not on the quality of the performance work or the excellence of their programming, but rather on a famous name. Often I’m a bit shocked by it all – I didn’t know Famous Conductor had “a Brahms.” I expected that the conductor would approach the concert with his usual style and grace and what I would hear would be Brahms as only that conductor could conduct it. I also expect that his interpretation of Brahms would change and evolve over time and wouldn’t be one, set thing that I would be going to hear.

When I take students to live classical concerts, they are often shocked by the often wide difference between what they hear from the stage versus what they heard from their speakers. The world of interpretation is often new to students who dwell in the halls of popular music, where the version you hear online or on the radio will be exactly the same as you hear at the concert or on the video version. It’s not the same for classical music: the notes are (mostly) the same, but the interpretation(s) can be very different and can make you hear the music a new way. Or, it can be disappointing because today’s performance just doesn’t equal the recording you love. So, go for the art, not the glory – and then let the glory of the performance come through to you.