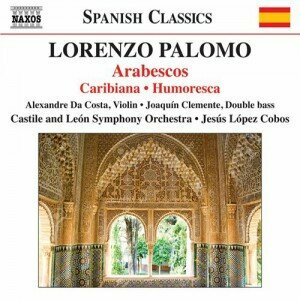 Lorenzo Palomo has long established himself as one of Spain’s greatest contemporary composers, and these three recent works reveal the vivid themes and colours of his music and the richness of his orchestration. Arabescos evokes Spain’s Moorish past in episodes linked together with rhapsodic freedom and fluidity, while Humoresca features the double bass as its protagonist in writing as witty as it is virtuosic. The extended choreographic poem Caribiana is sensuously atmospheric and has a wealth of exuberant rhythms and melodies.