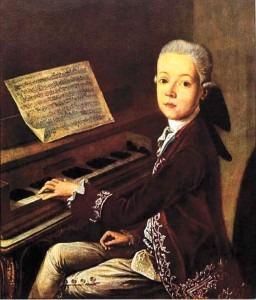 The vast majority of Mozart’s independent arias is composed for the soprano voice. However, there are a handful of concert arias for the tenor voice that emerged, especially in the operatic domain, as the result of the decline of the castrato. Mozart always paid close attention to the particular capabilities of the musicians he worked with, and these arias offer insight into the potential of the newly emerging voice type of the modern tenor voice. Mozart first dabbled with opera, or more specifically with the concert aria, during his families visit to London in 1765. Daines Barrington reported to the Royal Society, “I said to the boy, that I should be glad to hear an exemplary “Love song” that might be used in an opera. The boy on this looked back with much archness, and immediately began five or six lines of a jargon recitative proper to introduce a love song. He then played a symphony, which might correspond with an air… If this extemporary composition was not amazingly capital, yet it was really above mediocrity, and showed most extraordinary readiness of invention.” At some point after this little demonstration, the 9-year old composer set a section of Metastasio’s libretto Ezio, a text that had also served Handel for his opera of the same name. “Va, dal furor portata,” K. 21 / K6 19c did not receive a public performance, however, his very next tenor effort “Or che il dover/Tali e cotanti sono”, K. 36, was given in Salzburg on 21 December 1766. As part of the dedicated entertainment, it marked the anniversary of Archbishop Sigismund von Schrattenbach.

In his maturity, Mozart primarily composed opera and concert arias for specific tenors. He once wrote, “I like an aria to fit a singer as perfectly as a well-made suit of clothes.” Among his favorite tenors was Munich-born Valentin Adamberger, who originated the roles of “Belmonte” in Die Entführung aus dem Serail, and “Herr Vogelsang” in Der Schauspieldirektor. In addition, Mozart also wrote two concert arias for him, “Per pietà non ricercate,” K. 420 and “Misero! O sogno, o son desto,” K. 431.

Wolfgang Amadeus Mozart: “Per pietà non ricercate,” K. 420
Misero! O sogno, o son desto,” K. 431
Apparently, Adamberger “had a wide vocal range and great flexibility with exceptional control over his legato line,” and like Mozart, he was a freemason. Capable of expressing the drama of the texts in a number of different singing styles that could convey different emotional colors, Mozart composed a total of seven major arias for Adamberger. The insertion aria “Per pieta” is filled with a sense of unyielding anxiety over love, as the character has been asked by his friend to find out if his wife to be is faithful to him. The overall theme of the aria is an unrelenting search for solace from torment, which is echoed throughout Mozart’s musical language by large intervallic leaps and passages of minor tonality. “Misero! O sogno” is a fully realized dramatic scene, and suggests “the regard Mozart had for Adamberger’s ability as a musical actor rather than simply a skillful singer.”

Scholars have suggested, “In Mozart’s mature concert arias the accompaniments of the initial recitiatives are richer even than those of his mature operatic arias. While the actual arioso passages are surprisingly few, the harmonic and rhythmic structure of the orchestral passages reaches a high level of musico-dramatic tension almost from the onset.” Mozart clearly uses the extraordinary strength of his vocal writing and his thorough understanding of orchestration to synthesize powerful musical drama.
Alfred Einstein observed that in “the concert hall, or as part of an oratorio, Mozart composed concert arias into which he poured the riches of his vocal invention and his orchestral skill.”

The Arias will be performed by Rolando Villazón with the Vienna Philharmonic under Yannick Nézet-Séguin at the Mozartwoche Salzburg on 1 February 2017.