I first met Piotr Anderszewski at la Roque d’Anthéron Piano Festival. I had heard of this talented  pianist, but never had a chance to listen to him live. 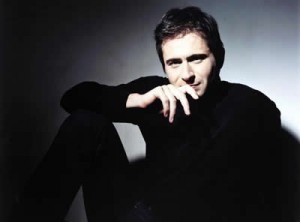 I still remember the evening concert where I first met him. My favourite Bach Partita was on the programme, and I get very excited whenever there’s Bach. And so I began my evening full of anticipation and enthusiasm – a bit like a child who finally gets his hands on the chocolate dessert after a meal of boring veggies.

The concert was staged in the beautiful garden of Château de Florans. As I strolled towards the venue that evening, I passed by a little house from which floated strains of the last movement of the Partita. Even then, I realised that it was without a doubt Piotr, warming up for his imminent performance. The shutters were down so one could not glance inside, but the music was clear and loud.  I could hear the pianist concentrating on that last bit, repeating it over and over again, reaching for perfection. I remained behind that window for maybe over ten minutes, touched not only by his will and perseverance, but also by the vulnerability of his art.

The performance had of course been a pure marvel.

Following the concert I bought several CDs and queued up for an autograph, looking forward to meeting my idol face-to-face. Those were the pre-Interlude days, before I came under the ‘Classical music website’ umbrella, so I had no good excuse to linger after the signing, nor could I casually throw out a “Hi handsome, how about a drink?” And so, under the gaze of the people waiting behind me, I picked up my CDs and left for my hotel empty handed, so to speak.

Amongst the CDs I brought home that evening, my passion was not only for the Bach Partitas, but also the Diabelli Variations. Piotr’s performance was original, riveting and fascinating. For the first time, the Variations were infused with all the colour and dimension they deserve. From a simple and sometimes boring piece when performed by other pianists, Piotr unearthed a gem, delicate and intricate, revealing hidden facets.

I joined the Queen Elisabeth Musical Voyage a year later, and the highlight for me was an entire week with Piotr, who was on board as a guest artist.

When you spend a week on a cruise ship, sharing meals, lounging around the pool, or attending concerts with the same group of passengers, it is quite easy to launch into conversation and reach the “how about a drink together” stage. In fact, not only did we have drinks, we also did lunch, dinner and more drinks!

Piotr gave only two concerts unfortunately, which was definitely not enough. I still have a lasting memory of the recital in which he performed Bach’s English Suite No. 6 and Beethoven’s Sonata No. 31. It was mesmerising. He was my chocolate cake among the veggies. I do eat veggies, mind you, but I have a passion for chocolate.

The best part is that we remained in contact after the Musical Voyage. Piotr has a charming personality – simple, humble, straightforward and extremely intelligent, all topped with a great sense of humour. He is also an aesthete, which means he is demanding, not only with others, but also with himself.

A bon vivant and a fine gourmet, Piotr made each evening a pure delight. He was the perfect companion with whom to share ideas about music, travel and life, while savouring delicious food with a good bottle of wine.