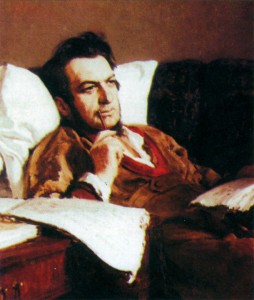 Mikhail Glinka (1804-1857), often called the “Father of Russian music,” was a bit of a delicate flower. Because his older brother had died in infancy, his grandmother lavished great care on his physical wellbeing. Glinka remembers, “Soon after my birth my mother was obliged to confide my upbringing to my maternal grandmother, who, having taken possession of me, removed me to her room, where, together with my two nurses, I spent the next three or four years, seldom seeing my parents. As a child, I was delicate, and subject to nervous and other disorders; my grandmother, an aged lady, was almost always unwell, and her room, in which I was confined, was kept at a temperature never lower than 25 Celsius.” She fed him copious amounts of sweets, wrapped him in fur and instigated emergency measure if the boy had the mere sniffles. As you might well imagine, Glinka grew up to become a veritable hypochondriac, always alarmed about the smallest physical or psychological symptoms. His dread of illness was only equaled by his terror of death.

The pages of Glinka’s Memoirs are filled with lists and catalogues of doctors and medications. Around the age of 20, Glinka was convinced that he was incurably sick. With his entire family viewing Glinka’s poor health with some anxiety, it was decided that he should follow his cousin’s example and seek a cure from the mineral waters of the Caucasus Mountains. When the icy waters exacerbated his ill health, he underwent a number of sessions with the local hypnotist. Although Glinka was not cured, he was strong enough to take on the job as assistant secretary in the chancellery of the Department of Public Highways in St. Petersburg. That job, arranged by his father, demanded a grueling “1 hour a day of work,” and left plenty of spare time for him to pursue his musical interests. As such, he “threw himself into a life of frenzied dilettantism, joining his friends in a series of musical revels.” Given Glinka’s frail constitution, this bohemian lifestyle was simply a recipe for disaster. 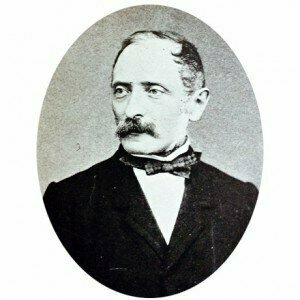 Over a number of years, Glinka developed a persistent eye infection that stubbornly refused all medical attempts at a cure. Teetering on the verge of a physical and mental breakdown, Glinka consulted Dr. Spindler, who discovered “a whole quadrille of medical disorders.“ Dr. Spindler and his colleagues advised Glinka to take leave of the harsh Russian climate and spend at least three years in warmer regions, after first trying the restorative waters of Aix. Glinka packed his back, and on 25 April 1830, accompanied by the singer Nikolaï Ivénof departed on his “medical excursion.” They traveled via Dresden, Leipzig, Frankfurt and the Rheine, to the recommended Swiss town. Eventually, they arrived in Milan, and made short excursions to Turin, Naples, Rome, and Venice. Ironically, Glinka contracted some kind of food poisoning that almost killed him and his traveling companion. Suffering feverish visions and desperately clinging to homeopathic cures, he barely managed to survive.

During his period of recovery, Glinka took up residence near Lake Maggiore and was cared for by Dr. Filippo de Filippi. An eminent physician, traveler, zoologist, and eventual senator, de Filippi subsequently set out on a scientific voyage to circumnavigate the globe in 1866, but died en route to Hong Kong on 9 February 1867. In the event, de Filippi had a married daughter, and Glinka quickly became infatuated with this highly cultured and beautiful woman. Glinka reports, “I naturally visited de Filippi’s daughter frequently—the similarity of our upbringing and our passion for the same art could not but bring us together. Because of her interest in the piano I began for her a “Sestetto Originale,” but later on, having finished it in the autumn, I was compelled to dedicate it, not to her, but to a female friend of hers.” 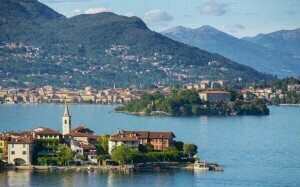 Since the inspiration for the Grand Sextet was clearly provided for by the physician’s daughter, we are left to wonder why the eventually dedication honors a different women altogether? You see, Glinka’s frequent visits to the daughter’s house were arousing exciting suspicions and gossip. So the good doctor devised an appropriate therapy to put an end to it. Glinka writes, “De Filippi was not a little concerned at this, and in order to put a stop to the unhappy business a bit more smoothly, he purposely took me to see his daughter the last time; we rowed about Lake Maggiore for almost the entire day in rather unpleasant weather, which indeed more or less matched our low spirits.” It is not know how long it took Glinka to recover his health after being forced to spend an entire day rowing about on an icy alpine lake!