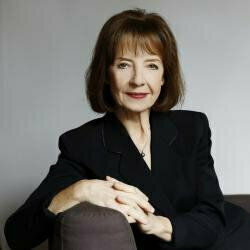 French pianist Anne Queffélec graduated from the Paris Conservatoire and then extended her studies in Vienna under teachers Paul Badura-Skoda, Jörg Demus and Alfred Brendel. She went on to win the Munich and Leeds piano competitions. You heard her in the soundtrack of Amadeus and now you can hear her in London on 20 June as part of the Blüthner Piano Series at St John’s Smith Square.

Her program starts with Handel and ends with Ravel and in a recent conversation, we asked her about the program and the piano she will be playing it on.

Your program for the Blüthner series is based around composers ranging from Handel to Poulenc, who are separated by some 200 years – what was your idea behind this programme?

I had in mind the relationship between each of the pieces in this programme, mainly based on individual character and poetic reasons. My love for Handel’s music, rather rare in piano recitals, induced me to conclude the first half of the programme with Beethoven’s Moonlight Sonata, because Handel was Beethoven’s favourite composer. Both possessed a tremendous vital energy, as well as a very personal sense of freedom in music. The presence of Poulenc alongside the Handel pieces is justified by the spirit of these three dances d’après C. Gervaise. They are graceful as well as pastoral, and rather “outside” music. The Handel suite, L’harmonieux forgeron [The Harmonious Blacksmith], follows on nicely for me from this very special Poulenc work, belonging to two different periods. I’ll play through these dances without interruption, and will ask the audience not to clap between them, as it’s a sort of musical walk through history. I hope that the passionate Moonlight Sonata will bring a different kind of dramatic intensity to the programme, giving it light and shade.

Can you tell us more about the Handel menuet in G minor (HWV 434)? What did the arranger, Wilhelm Kempff, bring to this?

Handel’s menuet is a transcription by Wilhelm Kempff, who has enriched considerably the basic material from the HWV 434 Suite, adding rich harmonies that sound closer in tone to an organ than a harpsichord. In a way, it’s not so much a dance, but almost a choral work, with a deeply spiritual dimension, increased by the lyrical possibilities the fortepiano offers in the modern age. It’s a meditative prayer, and is extremely moving.

You will close the program with Debussy and Ravel. Why did you include those composers and those works?

The second half is dedicated to Debussy’s Reflets dans l’eau and Ravel’s Miroirs because I love these marvellous pieces! By programming Reflets and Miroirs together seemed to me connected to this idea of “reflections”, even if the music itself in Ravel ensemble, in the individual titles of the five pieces, don’t give us the key for the global name of Miroirs. This remains a mystery; we have to be like Alice in Wonderland, and agree to follow Ravel, and go through the mirrors in turn!

Can you say anything about playing on the Blüthner piano? It’s described as ‘the piano with the golden tone’ – what do you think of their developments?

I am very happy to be giving a full concert recital on a Blüthner grand piano, as I am less familiar with this instrument having played Bach concertos in Leipzig only once before. It will be a very interesting and stimulating experience to explore the range of colours on this famous piano! I anticipate this thrilling discovery in June.