Events Reviews
Macbeth in Ravenna
by Peter Hermes May 12th, 2016 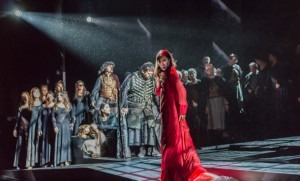 Not exactly seated in the center of the world you have to be curious about opera or love it to come to Ravenna for its opera season.

Located about 10 km from the Adriatic sea, this city founded at least 2000 years ago has seen many ups and downs until the conquest by Napoleone Bonaparte in 1797 who brought law and order in this and neighbouring provinces and also hit them with taxes that are heavier than the ones they pay today.

The teatro Dante Alighieri dates from about 150 years; it is an elegant brown structure with Roman columns, classic but inviting and we are guests of the opera house travelling from Perugia to review Macbeth the Verdi opera.

Inside this 800 seat rococo theatre, we have been given good seats next to the musicians, with the conductor on my right and on my left, the copious tears of my neighbour now at her second handkerchief.

Like many other opera houses built about one hundred and fifty years ago by the same architect who built la Fenice in Venezia, it has a platea (parterre) of about 300 seats and 5 balconies, four of which were full.

The walls and ceilings of the theatre have all the “de rigueur ” angels dancing to the music, the paint is a bit dated and so are our seat covers…..a major donor is required… Although the two lions on the city coat of arms proclaim “Felix Ravenna”!

Four acts three and a half hours: this is a symphonic work for choir, voices and orchestra, a dramatic theatre part of the trilogy of Otello, Falstaff and Macbeth that has obsessed the maestro the last years of his life. This is not for first time opera goers, impressionable people or the weak at heart.

The plot is based on the Shakespeare play and the Francesco Piave script; it is a sanguinary epic tale; the famous bloody hands of Macbeth run trough the four acts never letting you forget that you are inside a merciless story.

Above all, tonight’s show (because it is a show) belongs to Cristina Muti the director, regista, ideator, engine motor of this event.

A fantasy of “son et lumiere” with huge bodies of singers moving harmoniously in tune with the music never trespassing it, carrying it along judiciously, graciously or violently when it is called for. Clever and unexpected props like the skulls displayed copiously, like the table of the “last cena” with thirteen apostles recalling Leonardo’s famous painting makes the tale more gripping.

But now to the story:

Macbeth the valorous general is told by three witches of three fates attending him; the last one being king of the land after the next battle of Scotland. Good to their prophecy he returns victorious from the battle accompanied by Banco his comrade in arms.

Lady Macbeth the real leading heroine of the play entices Macbeth to get his rightful compensation at once: the kingship of Scotland.
The reigning king has to die.
And Macbeth has to do it.

Banco and Macduff find out the regicide and alarm the nation.

Macbeth is now called upon to kill Banco and his son, eventual rivals, and so he does while the son covered in blood escapes the massacre.

The third act has the witches concocting again the future of Macbeth,
predicting his death unless he kills Banco (done) and Macduff, candidates to his throne.

In the last act we are at the border of England and Scotland where refugees of the bloody reign of Macbeth have sought shelter.

It is time for Lady Macbeth and her famous sonnambula aria that eventually will carry her to the land of never return.
Macbeth is again called to arms to battle the army of Malcolm.
Macduff and the latter avenge the king and overcome Macbeth. 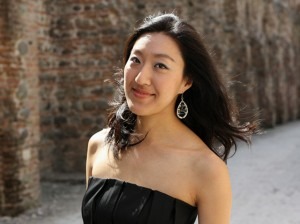 The endless carnage carried by a small team of players projected on the whole reign has fathered uncounted books, articles, interpretations, swerving over the centuries, could fill a spacious library room!

But we come for the music of the maestro:

Cristina Muti with a rich background in singing and directing has already
brought this Macbeth to Ravenna in 2013.

Nevertheless the show feels fresh and captivating, the light designed by Vincent Longuemare is exceptional: I counted only six lights but they profiled the work of art of the costumed choir and main protagonists with clever mastery.

And the voices? Vittoria Ji Won Yeo (Lady Macbeth) is a powerful, resourceful soprano, she has a large scale and in this character she exacts some visceral emotions from the spectator.

The colour of her voice is attractive and well supported in the high and low register. Alas at times, in the high register she unleashes a strident vocalise as if forgetting that she is in the middle of the stage…nevertheless her somnabula aria is totally convincing so are her duets with Macbeth, the other arias and the sextet.

Matias Tosi is not a born Macbeth: at the beginning, his voice is warming up and gradually convinced by the plot, he comes into character, displaying a nice baritone with sensitive musicianship in his arias as well as in the duo and sextet.

From the rest of the cast the energetic Macduff (Alessandro Scotto di Luzio) has the looks and the voice of an important tenor you expect to see on international stages.

Antonella Carpenito, the dame of Lady Macbeth has an enjoyable mezzo voice and Giovanni Sala delivers a strong Malcom rendition. Banco by Daniel Giulianini has a profondo basso that leads him to many important roles in the world of opera.
There is nobody in this cast that does not merit an excellent mark but space is limited.

One must however give special mention to the choir of Piacenza.

It is rare that a choir so large (80 singers) can sing with such pitch perfection, here you could think they are singing a Capella, how many soloists are hidden inside?
Only the outstanding choirmaster Corrado Casati knows.

The orchestra giovanile Luigi Cherubini that maestro Riccardo Muti has personally selected is vibrant, energetic and responded well to the masterful conducting of Nicola Paszkowski.

This symphony in four movements accompanied by choir, voices and a terror filled bloody allegory is so relevant to today’s ongoing terror carnage stories that you could think you are watching an extended edition of news accompanied by music.