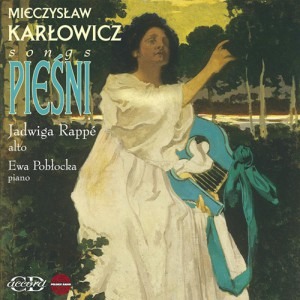 Mieczysław Karłowicz (1876 – 1909) was a Polish composer and conductor. He was born in Vishneva (now part of Belarus) into a noble family, being part of the Clan of Ostoja. His father Jan was a Polish linguist, lexicographer and musician. As a child he studied the violin, for which instrument he later wrote his only concerto. Karłowicz studied at Warsaw with Zygmunt Noskowski, Stanisław Barcewicz, Piotr Maszyński and Gustaw Roguski. He later studied in Berlin with Heinrich Urban, for whom he dedicated his Serenade for Strings which he composed and performed when he was still Urban’s student. From 1906 to 1907 he studied conducting with Arthur Nikisch. He died at the age of 32 in an avalanche while skiing on an excursion of the Tatra mountains in 1909.