On taking risks and the piano’s limits 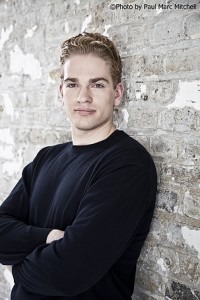 Performing the ‘Mount Everest of piano pieces’ (Brahms’ mighty Second Piano Concerto) in Hong Kong this October, Joseph Moog talks with me about lesser-known composers, and how far the piano repertoire can be pushed.

Pianists are very lucky to have such a large repertoire to pick from, but Joseph is just as interested in discovering works that, for one reason or another, have slipped into obscurity over time. And it seems to have paid off; his recent recording of Moritz Moszkowski’s Piano Concerto earned him a Grammy award nomination in the Best Classical Instrumental Solo category.

Moritz Moszkowski: Piano Concerto in E Major, Op. 59
‘Most of us, if we know about Moszkowski at all, know him as a composer of salonesque music, of little tidbits. I started looking into his oeuvre, and discovered larger scale pieces, such as the piano concerto.

‘I thought ‘if there was a concerto, why not do some research?’ And I found it’s a stunning piece. Like the Brahms, it’s very symphonic – it’s really something to be heard.’

Despite the honour of his Grammy nomination he hasn’t been invited once to perform the piece live. ‘So far nobody has been courageous enough to take the risk. The dimensions of the piece are just perfect. It’s not too long, it’s really breathtaking, and I definitely think it’s worth taking the risk for.

In Joseph’s opinion, less distinction should be made between pieces that are ‘famous’ and those that aren’t. 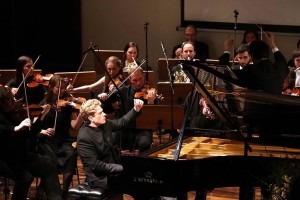 ‘I look at the huge piano repertoire and think how blessed we are to have the marvellous pieces we have. For me, it’s not about the ‘known works’ and ‘not known works’, for me it’s just one huge pool, and we’re in the wonderful position to choose from this big pool. No composer thought about becoming a rarity – they all wanted to show their feelings and emotions.’

In addition to searching out lost treasures, Joseph composes his own pieces.

‘For me, composing is going back to my roots. I started improvising when I was young, then started writing down what I improvised. When I improvise or compose, I let myself be free from the thoughts and marks and indications that I have to deal with day in day out. It’s more a personal need than to become a great composer, a second Liszt!

‘Sometimes I present these pieces as encores, but this isn’t the real purpose. It’s kind of a completion for me.’

Joseph works closely with living composers, including Wilfried-Maria Danner and Thierry Escaich, and often speaks of a search for his instrument’s ‘limits’.

‘I don’t search for limits because of the spectacle, instead because of the fact in those situations over history, something very unique has been created.

‘We are so used to the abundance of composers like Beethoven and Liszt who created whole new playing techniques, that we tend to overlook smaller achievements. Look at Scarlatti, and how he was able to bring so many things to the table. It wasn’t as ‘spectacular’ as Beethoven, but what he did was still impressive.’

D.Scarlatti: Keyboard Sonata in E Major, K.135/L.224/P.234
Scriabin is one such composer, and playing his concerto in 2015 was a personal highlight of Joseph’s career, having been enthralled by Scriabin’s music from the age of 10. Even before this, he remembers watching a German documentary at the age of 5 on Vladimir Horowitz playing Rachmaninov’s Third Concerto. ‘This was a very important moment in my life’, he says. ‘I was very young, and mesmerised.’

‘My mother gave me the score of the piece when I was around 6 years old. I couldn’t even read music of that complexity, but just looking at it, it was such an aesthetic experience, like looking into a book of fairytales. Kids love to look at pictures, and it was simply a beautiful picture for me.’

Notwithstanding his quest for the piano’s limits, Joseph sees the value in a break every once in a while.

‘There are so many different kinds of artists and musicians, and I can tell you I’m not the 24/7 music guy. I don’t judge; I have friends who do that and that’s all they need. Me, I need to be away from the world of music to come back with power and inspiration to give something.’

Joseph’s hobbies include walking, football, and swimming. Having active pastimes can help fight against the perils of a life spent travelling:

‘Travelling is another danger of musicians nowadays. The world is constantly getting smaller, faster and faster, more efficient.

‘You have to be robust and tough, but you need to be super sensitive on stage or else people will say he’s cold like a stone, there’s nothing in him!’

Joseph Moog will be performing in Hong Kong on October 15th 2016.