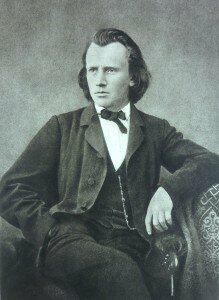 Among the great composer-musicians of the nineteenth century, Johannes Brahms (1833-1897) stands as somewhat of an anomaly. In an age that worshiped flamboyant personalities and in which composers strove to break from tradition in radical new ways, Brahms was a private man who forged his own musical identity while upholding the traditions of the past. The Violin Concerto — written for his lifelong friend, the famous violinist Joseph Joachim — embodies his high regard for classical forms and reflect his disdain for bravura and empty technical display. Although it poses some of the most difficult challenges in the concerto literature, Brahms’s Violin Concerto is not a showpiece: rather it reveals his desire to blend solo and orchestral lines into a unified, symphonic texture. This essentially symphonic conception is confirmed by the fact that Brahms originally planned the composition in four movements. In the event, he reported to Joachim “the two middle movements have fallen through. Naturally they were the best ones. However, I have substituted a feeble adagio”. Merely three years later, as is well known, Brahms would fashion an ingenious four-movement hybrid between the symphonic and concerto genres with his second piano concerto. Scholars have suggested that the discarded Scherzo from the violin concerto migrate seamlessly into the piano concerto of 1881. Since Brahms was not a violinist, he sent sketches of the solo part to Joachim for advice. He writes: “I wanted you to correct, and I didn’t want you to have any excuse of any kind; either that the music is too good or that the whole score isn’t worth the trouble. But I shall be satisfied if you just write me a word or two, and perhaps write a word here and there in the music, like ‘difficult,’ ‘awkward,’ ‘impossible,’ etc.” Joachim worked painstakingly through the entire manuscript, and communicated his suggestions to Brahms, who characteristically ignored most of it. Nevertheless, Brahms entrusted Joachim to write the Cadenza for the first movement, which quickly became an integral part of the composition. Huber Foss wrote, “of all of Brahms’s major work, the violin concerto is the one that shows in the highest degree of perfection the reconciling of the two opposites of the creative mind—the lyrical and the constructive; Brahms the song writer and Brahms the symphonist.” The work premiered on New Year’s Day 1879 at Leipzig, with Brahms conducting and Joachim featuring as the soloist. 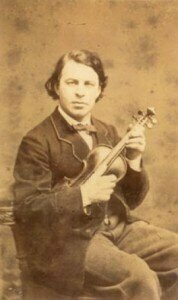 The opening “Allegro” movement features not only a contrast between themes but also between solo and orchestral presentations of the musical materials. The orchestra opens with a noble, triadic melody in the low strings and woodwinds. The full orchestra takes up this theme and modulates towards a secondary theme. The second theme, however, does not materialize. Instead, the arpeggiation is broken off and the solo violin enters with a brilliant minor version of the principle theme. The Orchestra and solo violin eventually return to the peaceful mood of the opening, and finally the soloist introduces a lilting theme in the style of a Viennese waltz. An extended development sees the orchestra and the soloist share equally in the process of expanding the musical ideas, until the timpani returns us climactically to the musical material heard at the beginning. The secondary theme makes another appearance, before Joachim’s virtuosic cadenza brings the movement to a tranquil close. The slow “Adagio” opens with an extended oboe solo accompanied by the choir of woodwinds. The solo violin quietly expands on this melody, punctuated by brief woodwind interjections. In the contrasting section, dissonant harmonies accompany the soaring melodic lines played by the solo instrument. The concluding “Allegro” is a fiery Rondo imbued with a distinct gypsy flavor in homage to the Hungarian-born Joachim. The recurring refrain — featuring double stops, snappy rhythms for the solo violin and a rumbling accompaniment which sounds like the strumming of a guitar — is contrasted by two episodes. Both feature sequentially virtuosic passagework and a cadenza-like passage for the violin, which leads the work to a triumphant close.