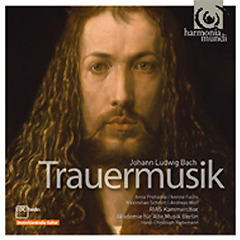 Tutti:
My bonds are broken asunder.
Lord, this is thy doing.
Now I may see at my feet
those whom once I had to obey;
Satan, Death and Sin.


Johann Ludwig, second cousin of Johann Sebastian, and Kapellmeister to the Meiningen court, was commissioned by the Duke Ernst Ludwig of Saxe-Meiningen to compose this funeral music in his memory.

The Trauermusik was based on a strophic song written by the Duke, and is by far, the largest and most ambitious of Johann Ludwig Bach’s surviving compositions.