When the legendary Brazilian musician João Gilberto (1931-2019) released his first record, Chega de Saudade, nobody could foresee that it would become one of the most influential events in modern Brazilian music. Gilberto had created a unique romantic and reflective musical style that mixed traditional samba music with modern jazz influences. “Bossa Nova,” or new trend or wave as it was called, brought together a syncopated guitar style with jazz-influenced harmonies and chord progressions, and was accompanied by an understated and laid-back way of singing. This cool and sophisticated musical style resonated deeply within an increasingly urban population and a country on the verge of rapid industrialization. Everybody was looking towards the future with great optimism and enthusiasm. Initially, Bossa Nova became popular among the middle and upper classes, but soon its popularity spread onto the international stage. 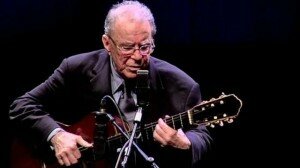 Born in the Brazilian state of Bahia in 1931, Gilberto got his first guitar at age 14, and soon formed his fist band “Enamorados do Ritmo.” Moving away from home, he discontinued his studies in order to dedicate himself exclusively to music. He initially struggled to find acceptance for his music, and at age 19 headed to Rio de Janeiro to seek his musical fortunes. Unable to make his mark, he moved away from the city to perfect his new musical style. By 1956 he was back in Rio and struck up a friendship with Antônio Carlos Jobim, a composer, producer, and arranger working for Odeon Records. Jobin wrote “Chega de Saudade” with lyrics by Vinicius de Moraes, and Gilberto’s interpretation became the first bossa nova hit. A full album with the same title soon followed, and along with other leading Brazilian musician Gilberto appeared at a legendary concert at Carnegie Hall in 1962. One year later he released the album “Getz/Gilberto” with the American saxophonist Stan Getz and the single “Girl from Ipanema” became not only a mega world hit, it is still one of the most celebrated songs of the bossa nova era. 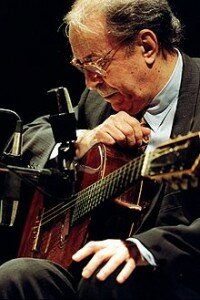 João Gilberto was legendary for his pioneering music making, but he also suffered from debilitating stage fright. The gossip pages were full of stories about Gilberto’s shyness, but his glorious talent and under-stated sensibilities always lifted him well beyond pop music fads. Miles Davis once said, “João’s delivery was so hypnotic that he would sound good reading a newspaper.” He certainly had an unusual relationship with his audience, never reaching out to his listeners with cheap effects or hyped gestures. Instead, audiences had to adapt to his personal artistic vision; they had to come into his personal artistic space. His daughter relates, “I would sometimes see him seeking for different chords for classics he’s been playing for 14 years. I could not believe his obsession, always seeking for perfection, something that could be better, a version that no-one had thought of before.” 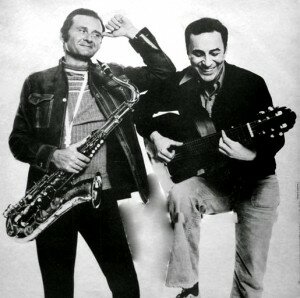 Thanks to João Gilberto, Bossa nova had become a global movement, but the Brazilian music scene changed rapidly in 1964. A military coup ended the years of optimism, and a number of leading musicians were jailed and exiled by the authorities. Gilberto remained in self-imposed exile in the US until 1980, but on returning to Brazil he began to work with a younger generation of Brazilian musicians. A Brazilian music journalist writes, “Gilberto was the principal voice of the best known Brazilian style in the world and a revolutionary without even really meaning to be.” Sadly, he struggled with mental health and financial issues late in life, and he had not been seen in public for several years. Gilberto died at age 88 of causes unknown, but according to his son, “his fight was noble, and he tried to maintain dignity.”