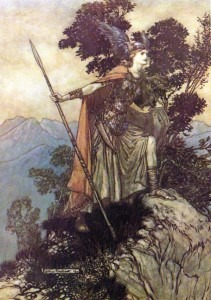 Hero maidens in the sky, taking the fallen warriors to their golden future – that’s the normal vision of the Valkyries. Don’t forget the sword and the winged helmet!

After Das Rheingold, Wagner continued the story of The Ring of the Nibleung with the story of Wotan’s warrior daughter, Brunnhilde, and her sisters, The Valkyries, laid around the illicit love of Siegmund and Sieglinde.

In Somtow Sucharitkul’s Thai vision of the Valkyries, we are now placed in the modern era – during Japan’s occupation of Thailand during WWII. We start with Sieglinde, as the Thai ‘comfort wife’ of Hundig, on her knees, with her head properly below that of Hundig’s. Her own servants are even lower to the floor. 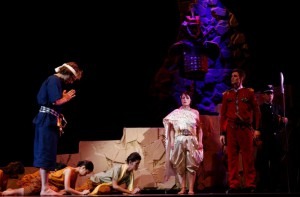 Siegmund (Charles Hens) (in blue), 2 servants, Sieglinde (Janny Zomer), Hundig (in red), with the suit of armor behind.

Prominent in the Hundig household is a suit of samurai armor, with the sword stuck through it. This was a much more satisfying place for the armor than the traditional setting of the sword being stuck through a tree that happens to be in the middle of the house.

With Sieglinde singing most of the first scene from floor level, you can imagine her surprise when up through the floor comes Siegmund, having dug his way out of a Japanese prison camp, and, unfortunately, coming out in the Japanese commander’s own house. 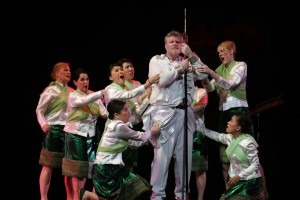 Phillip Joll as Wotan with the Valkyries

In the next act, we switch to Valhalla. Wotan appears in a white uniform, representing the military side of the war. We sense his anguish as he tries to deal with the problem of Siegmund after Fricka’s demand that he be sacrificed because of his adultery and incest. The real surprise in the production, although a very satisfying surprise, was the Valkyries as uniformed members of Wotan’s military staff. The Valkyies were wonderful as they sat typing, running messages, plotting the battles to come – it seemed to give them a much more useful role in life than just running around on their horses picking up dead heroes. 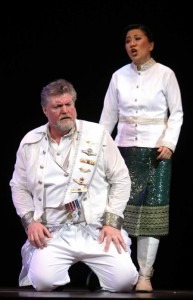 Jessica Chen as Brünnhilde and Phillip Joll as Wotan

When it came time for the ‘Ride of the Valkries’ scene, there were no horses, no riding through the sky, but, instead, the Valkyries signaling the air support to come in to airlift out the heroes. Again, these are the Valkyries in a leadership role, not just mindless servants.

Jessica Chen as Brünnhilde was a lively character – she so wants to do what Wotan desires and it is her reading of his mind (‘save Siegmund’) that causes her to purposely not hear what he says (‘sacrifice Siegmund’). She’s young and plucky and just perfect in her role. In the last scene, you see this exuberance as she runs into Wotan’s arms as he condemns her to the Ring of Fire (03:40), that they walk off hand in hand signals a far closer relationship than you see in most productions.

In the mix of Siegmund and Sieglinde’s troubles on earth, and Wotan’s and Brünnhilde’s troubles in Valhalla, together with the completely Thai story line, Somtow gave us a unique vision of a universality of family problems. By taking the story line out of the traditional horns and helmets and moving it to a modern and more understandable era, we can understand the story more deeply.