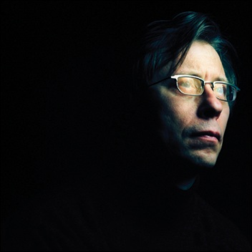 Last Friday, a packed out Queen Elizabeth Hall played host to the London Sinfonietta’s performance of Georg Friedrich Haas’ in vain, generating an air of cultist excitement around its London premiere. The piece’s famous use of darkness and light ensures that to fully experience it one must see it live. Whilst many of the audience members I spoke to were familiar with the piece’s recording, to most this performance still amounted to a ‘first listening’, giving the event a peculiar mixture of novelty and familiarity.

Yet “novelty”, with its connotations of fad and gimmick, is an unfair adjective to inflict upon this striking, effective piece. The metaphorical and literal darknesses that pervade the work are unquestionably affecting and pack a hefty emotional and musical punch. Their effectiveness comes, at least in part, from the lack of subtlety employed in their execution: Haas does not pussy-foot around his piece’s concept. When the descent into darkness first comes, it is given strong and straightforward parallel in the music.

Yet this boldness of execution never feels crude. At least in part, that is due to the sheer visceral power of the move into darkness. Haas’s darkness isn’t the ‘soft’ darkness of the cinema or theatre, but a hard, pitch blackness. For some in the audience, this effect was slightly undermined by the glimmers emerging from the sound box at the rear of the auditorium. But from where I was sitting, staring straight ahead was so pitch black as to render the difference between open and closed eyes meaningless. 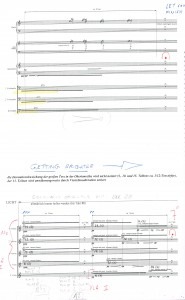 Credit: Music of our Epoch

The effect of this darkness was more total than I had expected. Whilst I often close my eyes in live performances – to concentrate on a particular line or idea – the fundamental difference between a live performance and a recorded one, for me, is often the visual aspect. In particular, the ability to focus on individual performers allows me to pick out particular lines and follow individual performances. The use of dark thus had the peculiar effect of erasing the London Sinfonietta and leaving me feeling as if I was in a room with the sound alone.

The music further invited this interpretation. The piece’s opening – a cascade of brilliant, rapid, descending lines – is presented as a mosaic of individual melodies, whilst the ensuing darkness is possessed by dark, earthy, chords. The only punctuation of its amorphous, spectral chords comes from the harp – which is correspondingly illuminated by a single spotlight.

This peculiar erasure of the performers was rendered all the more dramatic by the sheer difficulty of the music involved. When the piece emerges from its first spell of darkness, the shock of the sudden light was genuinely disorientating. Seeing the sweat-drenched conductor, the dynamic Emilio Pomarico, gently dripping onto the mammoth score was an effective way to be dragged out of the bowels of the piece’s darkness.

The final twenty-five minutes of in vain is one of the most exciting, absorbing musical experiences crafted in the twenty-first century. Emerging from Rhinegold-esque chords in horns and progressing towards the second spell of darkness, the bristling energy of the piece is underpinned by flashes of blinding light, especially with the energy of the Sinfonietta’s performance. The almost unbearable build up of tension in the work is almost released by the fearsomely loud tam-tam clashes, but spills over into the rapidly accelerating reprise of the opening. It is this reprise that inspires the piece’s title, in vain – the piece’s attempts to escape its beginnings are supposed to seem futile, its reprise, frustrating. This idea was extremely effective. The visceral, earthy horror of the final darkness hung over the almost ebullient end, and its sudden, out-of-the-blue ending left our sense of shock still marvellously in tact.

Haas, in his preconcert talk, humorously commented that the music ‘fails’ as a political piece. His inspiration – the return of the Austrian far-right – he felt too horrified by to express through musical analogy. Instead, the piece is a metaphor more directly to the concepts of light and darkness, a task at which it succeeds utterly. It is a touch crude, and maybe a little too hefty, but its sledgehammer impact was guaranteed to bring the Queen Elizabeth Hall to its feet. in vain is a piece that everyone interested in contemporary music should see live at some point in their life.